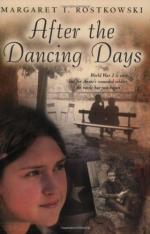 Margaret I. Rostkowski
This Study Guide consists of approximately 33 pages of chapter summaries, quotes, character analysis, themes, and more - everything you need to sharpen your knowledge of After the Dancing Days.

After the Dancing Days Summary & Study Guide includes comprehensive information and analysis to help you understand the book. This study guide contains the following sections:

This detailed literature summary also contains Topics for Discussion and a Free Quiz on After the Dancing Days by Margaret I. Rostkowski.

After the Dancing Days is the story of Annie Metcalf and her family, who live in Kansas City, Kansas, at the end of World War I. Annie's father, Larry, has served as a physician at a military hospital in New York City during the war. He returns to find Annie a more mature young lady of thirteen. Annie adapts to her father's homecoming amidst her mother, Katherine's, refusal to acknowledge the war or its horrible aftermath. Katherine's brother and Annie's favorite uncle, Paul, had died in the war; and Annie still struggles to accept that Uncle Paul is gone.

Uncle Paul was the first person to have acknowledged that Annie is growing up; and Annie clings to memories of accompanying her uncle to the opera and riding as a passenger on his new motorcycle. Annie recalls the day that the family was informed that Uncle Paul had died. Annie's grandparents, especially her grandmother, have never been the same since.

Grandfather chooses to address his grief directly and visits St. John's Veterans Hospital, where wounded soldiers are treated in Kansas City, to spend time and read to the patients, especially a local boy named Timothy. One day, Annie accompanies her grandfather to St. John's and meets a badly disfigured young man named Andrew, whose body is badly scarred as a result of mustard gas poisoning. Andrew's bitterness about his disfigurement threatens to frighten Annie away. Yet she is drawn to Andrew; and the unlikely two form a friendship over the summer months as Annie visits every day. Annie's mother is opposed to Annie's visits to St. John's, because she wants to protect Annie from the harsh realities of the ravages of war.

Katherine forbids Annie to visit the hospital anymore. However when Katherine accompanies her own parents on a health sojourn to Colorado, for Grandfather's recuperation from a heart attack, Annie visits the hospital every day. Soon Andrew anticipates Annie's visits. Annie instills in Andrew a new interest in life and exploring the world again. Andrew also helps Annie discover the mysterious events of her Uncle Paul's death in the war. This means Annie and her family must acknowledge some unsettling facts.

Ultimately, Andrew accepts a job assisting other wounded soldiers at a hospital in Topeka; and Annie is heartbroken at the thought of losing Andrew. Katherine accepts Annie's friendship with Andrew and invites Andrew to dinner at the Metcalf home the night before he leaves for Topeka. Annie learns that she has helped Andrew to accept his life and begin to make plans for his future, even though she is sad to see him leave. The lessons for Annie and her family include acceptance and letting go of preconceived ideas about heroism, as well as the inevitability of change for each of them.

More summaries and resources for teaching or studying After the Dancing Days.

After the Dancing Days from BookRags. (c)2022 BookRags, Inc. All rights reserved.