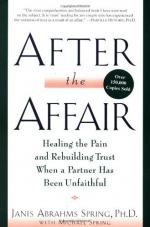 After the Affair Summary & Study Guide

Janis Abrahms Spring
This Study Guide consists of approximately 35 pages of chapter summaries, quotes, character analysis, themes, and more - everything you need to sharpen your knowledge of After the Affair.

After the Affair Summary & Study Guide includes comprehensive information and analysis to help you understand the book. This study guide contains the following sections:

This detailed literature summary also contains Topics for Discussion and a Free Quiz on After the Affair by Janis Abrahms Spring.

The text explores the methodology used to rebuild the trust and heal the pain within a post-affair relationship. A basic assumption of the book is that a relationship exists where a known and significant breach of trust has occurred and yet both partners desire to rebuild and rehabilitate the relationship. The text does not deliberately limit the affair or the relationship but does assume that the affair probably involved extramarital sexual intercourse, remained secret for some period, and was subsequently discovered by the hurt partner. The text addresses the various stages of recovery and therefore infers that the discovery of the affair was at least some few weeks in the past and that the affair is probably not ongoing.

The text is organized in an intuitive and straightforward manner, which aids materially in comprehension and informs the overall recovery and rebuilding process. The first major segment of the text deals with the emotional firestorm which surrounds the discovery of an affair. It is presented in two chapters—one describing the effects upon the hurt partner, and one describing the effects upon the unfaithful partner. The development of this section is remarkably unbiased and presents one of the strongest aspects of the text.

The second major segment of the text deals with the interaction between the hurt partner and the unfaithful partner in the immediate aftermath of discovery. In essence, the second segment attempts to assist the reader to determine whether they should remain in the relationship; even so, a basic premise of the text is that the reader has likely already determined to attempt to retain the relationship. The segment is divided into two chapters—one describing common ideas about love and relationships, and one offering advise and tools to those who must confront their personal doubts and fears about remaining in the damaged relationship.

The third major segment of the text is the largest portion of the book and deals with the actual recovery process. The section assumes the affair has been discovered and discontinued and that both partners have recommitted to the damaged relationship. The segment is developed through five chapters, each a topical treatment of issues likely to occur in a post-affair relationship. The first lengthy chapter explains how partners can learn from each other and their recent experiences. Other chapters offer suggestions for restoring trust, methods to discuss the affair, and, in the longest chapter of the book, strategies for approaching sex once again. The segment concludes with a small chapter offering suggestions about how to forgive the other partner. The text ends with a notable amount of supplementary material including, in some editions, an epilogue, extensive notes, a bibliography, and an index.

More summaries and resources for teaching or studying After the Affair.

After the Affair from BookRags. (c)2022 BookRags, Inc. All rights reserved.