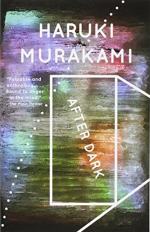 Haruki Murakami
This Study Guide consists of approximately 48 pages of chapter summaries, quotes, character analysis, themes, and more - everything you need to sharpen your knowledge of After Dark.

After Dark Summary & Study Guide includes comprehensive information and analysis to help you understand the book. This study guide contains the following sections:

This detailed literature summary also contains Quotes and a Free Quiz on After Dark by Haruki Murakami.

Murakami’s After Dark starts in the present tense with the omniscient narrator guiding us on a tour over Tokyo. Slowly, we zoom down into an entertainment district and enter a Denny’s where we spot Mari sitting alone, drinking coffee, smoking a cigarette, and reading a thick book. Takahashi, a trombone player whose best friend once dated Mari’s sister, comes into the restaurant and recognizes Mari. He sits down across from her and the two strike up a conversation. He worries that she is out alone at night with no trains running to take her home, and so leaves her his phone number and tells her he will be back for breakfast after practice if she wants to wait for him. In the next chapter, the narrator brings us into Eri’s bedroom. She is in a strange, deep sleep. The television turns on, but it is unplugged. An image of a man sitting on a chair in an empty room appears on the screen.

Back at Denny’s, Mari is sitting alone when a large woman, Kaoru, comes in and sits across from her. Kaoru says that she is a friend of Takahashi’s, and that Takahashi told Kaoru to come her and ask Mari for help because Kaoru needed someone who spoke Chinese. Mari, who speaks Chinese fluently, agrees. Kaoru leads her to a love hotel called Alphaville where she is the manager and up to the fourth floor. Inside one of the rooms, two maids, Korogi and Komugi, sit with a naked girl about Mari’s age who has been beaten. Mari speaks to her in Chinese and discovers that she is a prostitute. She was with a client when she got her period, and he beat her and robbed her so she could not quickly call for help. The prostitute calls someone to pick her up, and Kaoru suspects that she is an illegal immigrant brought over by the Chinese mafia. Sure enough, a Chinese gangster pulls up on a motorcycle ten minutes later and picks up the prostitute.

Back in Eri’s bedroom, the picture on the screen clarifies and we see that the man in the screen us wearing a mask. The narrator dubs him the Man with No Face, and we discover that he is looking through the screen at Eri’s sleeping body.

Mari and Kaoru leave the Alphaville and stop at a bar to get drinks. They chat, and Kaoru offers to let Mari sleep in one of her rooms for free. Mari declines, and goes to the Skylark, a restaurant. She goes into the bathroom and washes something off her hands, then looks in the mirror at her reflection. We stay in the bathroom after she leaves, and watch as her reflection remains in the mirror without her there.

Kaoru goes back to the Alphaville and scans the security footage for evidence of the man who beat up the prostitute. When she finds him, she prints out his picture, and calls the Chinese gangsters to see if they want a copy of his picture.

The narrator then takes us to an office where Shirakawa, the man who from the picture, is working alone at a computer. His wife calls and asks him to pick up milk and he agrees. At a nearby 7-eleven, Takahashi takes a break from his band practice and buys milk and an apple. Back in Eri’s bedroom, her bed is empty. She is inside the screen, sleeping on a duplicate version of her bed.

Takahashi goes to the Skylark and talks to Mari. He asks her if she wants to go to a park and feed some cats, and she agrees. Back in Eri’s bedroom, we accompany the narrator through the television and into the alternate world. Eri wakes up and tries to find a way out, but she is trapped inside.

Mari and Takahashi arrive at the park and feed the cats. She tells him that her sister is in a deep sleep at home. At his office, Shirakawa exercises on a yoga mat, and then goes to clean up in the bathroom. He looks into the mirror for a long time, then leaves. When he leaves, we see that his reflection has remained. He calls a cab and heads home, stopping at 7-eleven to throw away the prostitute’s clothes and put her phone in the dairy case, and to pick up milk for his wife. Back at the park, Mari tells Takahashi she wants to go to the Alphaville, so he walks her there and tells her he will be back to take her out to breakfast in a couple of hours.

In Eri’s bedroom, she is on the other side of the screen, trying to break through, but unable to do so. At his house, Shirakawa watches a program about deep sea creatures. At the Alphaville, Mari and Korogi watch the same program. Korogi opens up and tells Mari about her past, and Mari tells her that her sister has been sleeping for two months straight. Korogi encourages Mari to try and remember being close to her sister.

At 5:00 a.m., Takahashi finishes practice, Shirakawa watches the news, and Mari sleeps at the Alphaville. In Eri’s bedroom, the television is off and Eri has returned to her real bed. Takahashi goes to 7-eleven to get milk, and finds the cell phone Shirakawa left in the dairy case, but leaves it there. Takahashi goes to the park and calls Mari at the Alphaville to see if she wants to go to breakfast, but she wants to go home. He goes to the Alphaville and walks her to the station. She reveals that she is leaving for China next week, but he gets her address so he can write to her, and they agree to a date when she returns in six months.

At the very end of the night, Mari gets into bed with her sister, cries, and kisses her three times. Then she lies down and sleeps cuddled up next to her. At 7-eleven, the clerk finds the prostitute’s cell phone. The narrator takes us back up above the city, and we observe the city as morning begins. We float down into Eri’s bedroom and watch as her mouth twitches.

More summaries and resources for teaching or studying After Dark.

After Dark from BookRags. (c)2022 BookRags, Inc. All rights reserved.