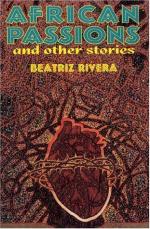 Beatriz Rivera
This Study Guide consists of approximately 41 pages of chapter summaries, quotes, character analysis, themes, and more - everything you need to sharpen your knowledge of African Passions.

Although not restricted to Latin American literature, magic realism holds a strong court in the writings of Hispanic authors. Some of the more famous examples of such writing include Gabriel García Márquez's One Hundred Years of Solitude, Laura Esquivel's Like Water for Chocolate, and Isabel Allende's Love and Shadows.

The term magic realism was first coined by German art critic Franz Roh in the late 1920s, but the phrase did not really catch on until Miguel Angel Asturias (from Guatemala) used the term to describe his writing when he received the Nobel Prize (1967) for his life's work in literature. Many of Rivera's stories take on the style of magic realism, such as the appearance of African gods in "African Passions."

The United States occupied Cuba from 1899 to 1901 under a military governor, General John...

More summaries and resources for teaching or studying African Passions.

African Passions from Gale. ©2005-2006 Thomson Gale, a part of the Thomson Corporation. All rights reserved.