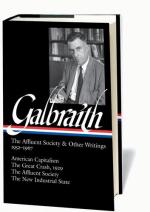 Additional Resources for The Affluent Society by John Kenneth Galbraith

Galbraith offers personal anecdotes about his encounters with a variety of United States presidents and other high-level government officials.

A Tenured Professor is Galbraith's novel about a professor and his wife who discover a stock market scam that allows them to spend their enormous earnings on liberal causes.

The Communist Manifesto (originally published in 1848) is the widely read pamphlet outlining Marx's and Engels's basic theories of socialism.

Between Friends is a collection of essays by a variety of people who have...