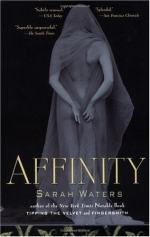 Sarah Waters
This Study Guide consists of approximately 35 pages of chapter summaries, quotes, character analysis, themes, and more - everything you need to sharpen your knowledge of Affinity.

Affinity is the second novel by English writer, Sarah Waters. In this novel, Margaret Prior begins visiting the female prisoners at Millbank prison in an attempt to help her overcome the depression that led to a suicide attempt the year before. As Miss Prior makes her visits, she becomes aware of a beautiful, young mystic. At first Miss Prior is fascinated by this woman's reported abilities, but it is the woman's apparent innocence that makes Miss Prior visit this mystic over and over again. In time Miss Prior comes to believe this woman is her soul mate, her affinity, leading her to agree to a plan that could lead to disaster for both women. Affinity is a gothic style mystery that will leave readers guessing even after the novel is done.

Miss Prior is put off by the prison at first, shocked at the way in which the prisoners are treated. The prisoners are not allowed to speak, are expected to work in silence daily, and are only allowed letters or visits from their family and friends a few times a year. However, it is believed that these women will benefit from visits by women like Miss Prior because the class with which Miss Prior and her contemporaries carry themselves is thought to help these prisoners aspire to a better life that does not include criminal acts.

Miss Prior's initial visits to the prison are difficult and she finds little solace in them. However, when Miss Prior sees Selina Dawes, Miss Prior learns that Selina Dawes is in Millbank for attacking a young woman who had come to her for guidance in spirituality. On their first meeting, Selina is cold and angry, causing Miss Prior to escape her cell quickly. However, over the next few weeks, Selina warms up to Miss Prior and they quickly become friends. In fact, Miss Prior finds herself drawn to Selina more and more.

As Miss Prior's mother places pressure on her to stop visiting the prison, Miss Prior finds herself visiting a spiritualists' library where she studies the case that led to Selina's imprisonment. The more Miss Prior learns, the more she becomes convinced that Selina is innocent of the charges against her. Therefore, when Selina confesses her love to Miss Prior, she believes her. This, coupled with flowers and other items that seem to miraculously appear in Miss Prior's room at home, makes Miss Prior not only believe Selina's confession of love, but to believe in her powers as a spiritual medium as well. When Selina suggests she might be able to escape Millbank, Miss Prior quickly agrees to run away with her.

Miss Prior buys Selina clothing and makes arrangements for the two of them to travel to Italy together. Then Miss Prior waits for Selina's spirits to help her escape Millbank. When Selina does not arrive in the night as promised, Miss Prior rushes to Millbank to find out what happened. Miss Prior learns that Selina has escaped. Miss Prior rushes home only to find one of the maidens from the prison waiting there. Miss Prior learns the maiden helped Selina escape the prison and that a new maid working in the Prior home is in fact Selina's maid. It is then that Miss Prior realizes she has been used in a plot to help Selina reunite with her maid, Ruth, and escape.

More summaries and resources for teaching or studying Affinity.