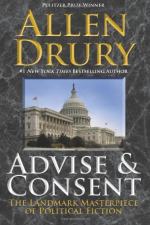 Allen Drury
This Study Guide consists of approximately 59 pages of chapter summaries, quotes, character analysis, themes, and more - everything you need to sharpen your knowledge of Advise and Consent.

This detailed literature summary also contains Quotes and a Free Quiz on Advise and Consent by Allen Drury.

“Advise and Consent” is a political drama novel by Allen Drury. It was first published in 1959. It recounts the confirmation process surrounding the President’s controversial nomination to Secretary of State, Robert A. Leffingwell. Senator Bob Munson, Majority Leader, unexpectedly learns of Leffingwell’s nomination through the news media, having had no previous notification from the President, also of the Majority party. Leffingwell has the support of many in the Majority party, especially the liberal wing. Most notable in his support is Senator Fred Van Ackerman. Some conservatives line up against Leffingwell, while some members of the Minority party wish to learn more about him before making up their minds. Chief in opposition to Leffingwell is the very conservative Minority Senator Seabright Cooley of South Carolina.

No matter where Senators fall on Leffingwell, nearly all are perplexed by the President’s desire to rush the nomination through confirmation and how little the President has consulted with anyone. Nevertheless, Munson falls in line to rally the Senators. He believes he will have more than enough votes to get Leffingwell through. The media is nearly completely behind Leffingwell. The Senate Foreign Relations Committee is called to consider the nomination. A subcommittee is formed to specifically question and discuss Leffingwell. Senator Brigham Anderson is put in charge. Anderson, of the Majority, has serious reservations about Leffingwell’s liberal attitudes toward foreign policy.

During the subcommittee hearings, even members of the Majority are dismayed to learn that Leffingwell emerges as a candidate determined to achieve peace at any price. He is willing to make serious concessions to the Russians to do this. When asked where he would draw the line, Leffingwell will not say. Leffingwell goes on to stun even more members of the subcommittee when he says that he will never advise the President to go to war unless the United States is attacked first. This is too much for many members of the Majority, who believe all cards should be on the table when dealing with the Communists.

As the hearings unfold, evidence is brought forth regarding Leffingwell’s past as a professor at the University of Chicago. A telegram has been received which states that Leffingwell was a member of a small Communist cell determined to bring Communism to America. The telegram’s author, Hebert Gelman, appears before the subcommittee to testify that he was also a member of this cell. Leffingwell cross-examines Gelman, saying Gelman cannot be trusted due to Gelman’s history with nervous breakdowns. Gelman argues that another man, James Morton, could prove Leffingwell’s membership. Between Gelman’s evidence and Leffingwell’s submissive attitude toward the Communists, Anderson emerges as one of Leffingwell’s chief opponents. Anderson believes the past is important, but it can only be forgiven if the individual is genuinely apologetic. Leffingwell is not apologetic, but he argues he loves the United States and will see her through challenging times.

Cooley manages to track down James Morton. The President and Leffingwell’s closest supporters realize they are in trouble. Liberal Supreme Court Associate Justice Tommy Davis, a backer of Leffingwell and friend of Anderson, steals a photograph from Anderson. The photograph is of Anderson and another man in Honolulu while Anderson was on leave during World War II. While the particulars of the photograph and its accompanying inscription are not revealed in the novel, it is compromising enough for Davis to ascertain that Anderson had a brief homosexual liaison. Davis gives the photo to Munson, who is enraged that Davis would stoop to such levels. Munson himself, however, refuses to destroy the photo. He hands it over to the President when the President learns of its existence from Davis.

Anderson is then threatened with exposure by Ackerman over the weekend if he does not back down from opposing Leffingwell. Each threat gets worse until Anderson’s wife is told the truth. Cooley and a few others learn the truth of the situation. The very conservative Cooley vows to stand by Anderson no matter what. Anderson, knowing he morally cannot back down from Leffingwell, sorry for his past, and horrified at what will become of his wife and daughter in the scandal that will undoubtedly ensue, commits suicide. His death rocks the country. The President, Munson, and Davis all realize what they have done.

Cooley and Majority Senator Orrin Knox then move to destroy Ackerman and defeat the nomination of Leffingwell. In his second term, the President plays his final card. He will back Knox for President in the coming election. Knox rejects this offer. Ackerman is censured by the Senate as Knox becomes the principal Majority party player and top opponent to Leffingwell. Working with Vice President Harley Hudson, Cooley, and numerous others, Knox manages to defeat Leffingwell’s nomination overwhelmingly. That night, the President suffers a massive heart attack and dies. Hudson becomes President and names Knox as Secretary of State. Knox is speedily confirmed. He and an American delegation travel to meet with the Russians in Geneva.

More summaries and resources for teaching or studying Advise and Consent.