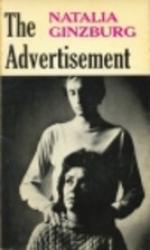 Introduction & Overview of The Advertisment

The Advertisment Summary & Study Guide includes comprehensive information and analysis to help you understand the book. This study guide contains the following sections:

This detailed literature summary also contains Bibliography on The Advertisment by Natalia Ginzburg.

Natalia Ginzburg, one of Italy's most admired playwrights of the post-World War II era, was granted the Marzotto Prize for European Drama for The Advertisement (1968). Originally written in Italian, its first translated performance was on the English stage.

The Advertisement centers around Teresa, a lonely woman separated from her husband, who rents out her spare room to Elena, a young woman attending university in Rome. From the moment Elena walks in the door, Teresa talks almost incessantly of her horrible childhood and her tumultuous marriage to Lorenzo, her estranged husband. After five years of marriage, Lorenzo left Teresa upon discovering her affair with his best friend. The play opens after she and Lorenzo have been separated a year. Teresa, however, is still obsessed with their relationship and is still in love with Lorenzo, although she broods resentfully over his treatment of her.

Elena moves into Teresa's spare room, and the two become friends. Elena enjoys Teresa's company, listening sympathetically to her long, sad monologues, although Teresa's demands on her attention prevent her from studying. When Elena meets Lorenzo, they are immediately attracted to one another and begin spending time together. After Elena admits to Teresa that she and Lorenzo are in love, Teresa at first seems to accept her pronouncement calmly and rationally. However, as soon as Elena turns her back, Teresa shoots and kills her and then calls Lorenzo to confess her crime.

As in many of her plays, Ginzburg is concerned with the experiences of women in modern marriage and modern relationships. In the character of Teresa, she also explores the theme of obsessive love.