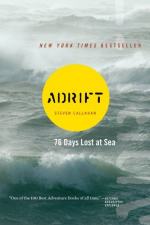 The Napoleon Solo is Callahan's ship, designed and built to his own specifications. When it sinks, Callahan is lost at sea.

The Rubber Ducky III is the life raft that he lives in for seventy-six days while lost at sea. Though built for six people, it lacks room enough for Callahan to stand or stretch out. It is covered with a low tent canopy.

The inflatable, balloon-like solar still desalinates saltwater. Callahan has two such devices. Maintaining them preoccupies much of his time.

Callahan's harpoon gun, placed in his survival kit on a whim, is his primary means of feeding himself. As time passes, the device becomes increasingly jury-rigged and less functional.

Callahan is able to salvage two equipment bags from the Napoleon Solo. One is his personal emergency bag. The other was included with the...