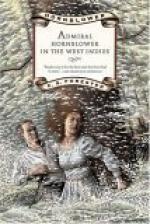 C. S. Forester
This Study Guide consists of approximately 43 pages of chapter summaries, quotes, character analysis, themes, and more - everything you need to sharpen your knowledge of Admiral Hornblower in the West Indies.

This detailed literature summary also contains Topics for Discussion and a Free Quiz on Admiral Hornblower in the West Indies by C. S. Forester.

Admiral Hornblower is commander-in-chief of the West Indies station from 1821 to 1823, and experiences several situations which demand personal intervention. First, Hornblower must personally intervene to prevent a French contingent from attempting to reinstate Napoleon as the emperor of France. He then intrigues to capture a Spanish slave ship and shortly thereafter spends a brief period of time as hostage to a band of dim-witted pirates. Hornblower subsequently escapes entanglement in a South American revolution and then survives a hurricane while attempting to return to England with his wife Barbara.

The novel consists of five major episodes occurring at the end of Hornblower's professional naval career. He has attained the rank of admiral and is appointed the commander-in-chief of the West Indies station. On a routine courtesy visit to New Orleans, Hornblower learns that a United States ship has been commissioned by Cambronne, a French general and one-time supporter of the exiled Napoleon. Cambronne intends to receive hundreds of French soldiers and boards large stores of munitions. Hornblower correctly deduces that Cambronne intends to rescue Napoleon from St. Helena and reinstate him as the emperor of France. Realizing success would mean a fresh eruption of global war, Hornblower intervenes by sacrificing his honor in a lie—he informs Cambronne that Napoleon has died. Hornblower returns to port to tender his resignation as a disgraced gentleman only to learn that by fortuitous coincidence, Napoleon has indeed recently died.

A few months later, Hornblower's West Indies fleet is unable to intercept Estrella del Sur, a fast and handy Spanish slave ship, which easily outstrips British pursuers. The crafty Hornblower follows the slaver into a neutral port where he ostensibly makes a courtesy visit to the governor—in reality, his crew uses the time to fasten a sea drogue to the slaver's underwater hull. When the slaver departs the port, Hornblower nonchalantly follows. When the slaver turns away and begins to run, the sea drogue stalls the vessel, actually pulling the rudder off. Hornblower then easily intercepts the slave ship and captures her. A few months later Hornblower and his secretary are captured by a small band of dim-witted pirates who crudely attempt to exchange him for a pardon of their crimes. The pirates release Hornblower to carry their demands, and, fortunately, his secretary is a capable man, who escapes a few hours later. Hornblower then carries a ship's mortar up-river and fires upon the pirate's putatively unassailable hideout, killing many and capturing the rest.

A few months later Hornblower meets Ramsbottom, a vastly wealthy Englishman who claims to have a fondness for yachting. Ramsbottom is actually a filibuster, who subsequently travels to the Venezuelan coast and intervenes in a revolution of local forces against the distant Spanish government. Hornblower treads a fine line between untoward laxity and actual involvement in the affair and comes away with a signal success free of long-term political implication. Finally, his term at an end, Hornblower is joined by Barbara, hands over his command and plans to return to England. The vessel upon which they travel, however, is caught up in an unseasonable hurricane and founders. Only Hornblower's seamanship and direct intervention saves the vessel from complete loss. After several dangerous days on the storm-tossed hulk, Hornblower and Barbara are rescued by a passing ship.

More summaries and resources for teaching or studying Admiral Hornblower in the West Indies.