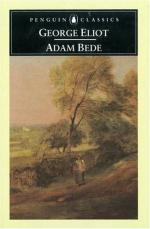 George Eliot
This Study Guide consists of approximately 33 pages of chapter summaries, quotes, character analysis, themes, and more - everything you need to sharpen your knowledge of Adam Bede.

A love triangle roils the peaceful pastoral life of a rural English village. With this novel, the earliest vestiges of what may be considered feminist consciousness make an appearance in English literature. The reader experiences the heavy existential burden of the British countryside of the same era depicted in Thomas Hardy's dark novels, but with a lighter authorial touch. The timeless theme of love and its casualties emerges through the eyes and words of an outstanding woman novelist who is the contemporary of the French woman novelist George Sand. The former, George Eliot is a nom de plume for Mary Anne Evans, while George Sand is the nom de plume of Aurora Dupin.

Although the story necessarily involves two young men vying for the affections of one Hester ("Hetty") Sorrel, it is the woman's experiences, viewpoint and sensibilities that form the foundation of the narrative and provide color and drama. Perhaps both contemporary authors who took the name George felt they needed to disguise their gender to write in depth about the European female consciousness of the mid-1800s. In any event, the appearance of this novel alongside those of George Eliot's French counterpart marks an important—if ironic—time in the evolution of literature that helped to set the stage for later advances in the status of women.

Adam Bede is a down-to-earth farm lad in Hayslope,a small northern English town close to the Scottish border. He is described as a rough-hewn, tall youth with jet black hair and dark eyes "under strongly-marked, prominent and mobile eyebrows, indicating a mixture of Celtic blood." He is an honest, God-fearing youth who falls in love with the mercurial Hetty and believes that she also loves him. But Hetty hides from Adam her passion for the aristocratic Arthur Donnithorn, a wealthy college student with a strong sense of entitlement.

Arthur plays along with Hetty to feed her passion, and she conceives a child which she hides from her family and friends as best she can. One day, Adam Bede sees the couple kissing passionately deep in the woods and realizes that he's been played for a patsy. Adam angrily confronts Arthur when they are alone and demands to know his intentions with regard to Hettie. He tells Arthur that he loves Hettie and wants to marry her. Hetty agrees to marry Adam and not long after, Arthur writes a letter to Hetty in which he tries to break off their affair. This only inflames her passion, and she sets out on a solitary journey to find Arthur in Windsor. Along the way, she delivers her child in the woods and in a panic, buries the infant in the ground and leaves it to die.

Hetty is arrested and charged with child murder. Both Adam and Arthur visit her in jail, but her mental health has deteriorated badly and she seems detached from any kind of reality. Just the day before her scheduled execution, Arthur carries by swift horseback a legal pardon and a stay of the execution. Adam Bede returns to his village in a profound depression. Gradually, he becomes interested in Dinah Morris, a young woman who is becoming a Methodist evangelical and who was once the love interest of his younger brother, Seth.

Adam and Dinah marry and begin to build a happy family, as common sense replaces passion in this quiet rural countryside.

More summaries and resources for teaching or studying Adam Bede.