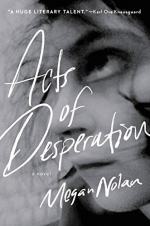 Megan Nolan
This Study Guide consists of approximately 59 pages of chapter summaries, quotes, character analysis, themes, and more - everything you need to sharpen your knowledge of Acts of Desperation.

This detailed literature summary also contains Quotes and a Free Quiz on Acts of Desperation by Megan Nolan.

The following edition was used for this study guide: Nolan, Megan. Acts of Desperation. Little, Brown, 2021.

It is spring, 2012, in Dublin. The twenty-something narrator, who never shares her name, first encounters the mysterious Ciaran, a Danish poet, at an art exhibit the narrator admits she attends largely because of the open bar. She is immediately attracted by his calmness, his sense of wholeness, and his striking looks. Her life, she freely confesses, to that moment has been something of a mess. After abandoning her early aspirations to be a writer and dropping out after a single semester at university, she is now a server at a hip hamburger joint. She lives alone. She struggles with body shaming, discontented over her chubby frame. She has few friends. She self-medicates her frequent bouts of self-loathing and depression through long, empty nights of hard drinking, promiscuous sex, and recreational pharmaceuticals. In her darker moments, she reverts to cutting herself, a self-destructive practice she first attempted in the years after her parents divorced.

After a series of clumsy text messages and a first awkward date at Dublin’s Natural History Museum, Ciaran and the narrator begin their tempestuous relationship. At first, the narrator cannot entirely explain the tectonic impact of their sexual experiences. She is enthralled by him, intoxicated by him, obsessed with him. She is aware of the lingering presence of an ex-girlfriend, the cool and sensual Scandinavian blonde Freja, with whom Ciaran still corresponds. In emails that the narrator hacks into, Freja cautions Ciaran that he is only using the dumpy Irish girl to make her jealous. Just before the narrator departs for a Christmas visit with her mother in Waterford, however, Ciaran gifts the narrator with a beautiful amber brooch and a handwritten message that reassures her that he loves her. She is stunned, however, when she returns to Dublin a week later and Ciaran summarily and without explanation ends their relationship. Reeling, the narrator seeks the solace of alcoholic binges. She reaches out to Lisa, her ex-roommate now living in Berlin, who counsels her to let time heal the anger and the hurt. Then in April, out of nowhere, Ciaran messages the narrator that he misses her. Three days later, he is back, a week later they move in together. Over the next several months, the narrator feels at last happy. Ciaran uses his connections in publishing to get her a part-time job on a magazine. Her days, however, are centered on the time she spends with Ciaran. The rest seems trivial. Never entirely sure of her happiness, against her own misgivings, she explores Ciaran’s computer and finds more than three years of intense ongoing communications with Freja. She is determined, however, to say nothing.

Conversations nevertheless become tense. She feels increasingly isolated. She turns more frequently to wine. She smokes obsessively. She eats carelessly. The paranoia, the anger roils inside her. At one point, as she castigates herself while she peels potatoes for dinner, she slices into her finger. The sex with Ciaran fails to excite her any longer, and, left alone for long stretches, she goes to dives and hook up with strangers. Her life spirals into self-destruction. After a health scare with her father, however, the narrator vows to stop the spiral. The promise does not last long.

On impulse she begins a clandestine affair with an ex-boyfriend, Noah, a charismatic singer in a hard-core garage band. The affair is as thrilling as it is meaningless for the narrator. Noah dominates her in bed, commands her, their sex is hard and fast, even animalistic. The band tours, so the narrator assumes the relationship can stay quiet. She finds herself inhabiting the thin space her lies create between her and Ciaran. Even when she lies to Ciaran to spend a weekend in London with Noah, the narrator is certain her secret is safe. It becomes something of a game with her. She relishes the feeling that Noah could not, would not deny himself her body. By September, the narrator, conflicted and increasingly hating herself, slides into the temporary relief of long careless nights of drinking, picking up total strangers in bars for quick sex, all of which she would dutifully record in her diary. In emotional turmoil, she embraces only the urgencies of the moment and her most immediate feelings.

In November, she turns 25. Noah texts her inviting her to come to London for a spell while the band records new music. She imagines the experience with delight and confronts Ciaran to break up only to find that he has discovered, and read, her diaries. In the mistaken idea, after reading her frank confessions, that she enjoys rough sex, he brutalizes her saying over and over that this is what she wanted. It is, she believes later, rape. She is left devastated. She moves out to a hotel. Two weeks later, she leaves Ireland entirely and heads to Athens in the hopes that she might make sense of her relationships. She decides after months of splendid isolation that perhaps someday love and sex might again be part of her life.

More summaries and resources for teaching or studying Acts of Desperation.