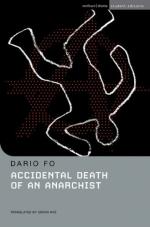 Dario Fo
This Study Guide consists of approximately 61 pages of chapter summaries, quotes, character analysis, themes, and more - everything you need to sharpen your knowledge of Accidental Death of an Anarchist.

Accidental Death of an Anarchist employs many elements typical of farce. Research the characteristics of farce and write an essay on Fo's play as a farce.

Research trickster literatures and write an essay comparing and contrasting figures from two different traditions, such as a Native American tradition and the African American Uncle Remus tradition.

Research one of the American terrorist groups of the 1960s or 1970s, such as the Weather Underground or the Symbionese Liberation Army. What were their political beliefs and goals? Did they consider people acceptable terrorist targets? Who were the leaders of these organizations? What happened to them? Compile your findings into a report with appropriate subheadings.

What were the political beliefs of anarchists such as Giuseppe Pinelli? Where did anarchist theories first develop? What are the basic tenets of anarchist politics? Present a report to your class that...

More summaries and resources for teaching or studying Accidental Death of an Anarchist.

Accidental Death of an Anarchist from BookRags. (c)2022 BookRags, Inc. All rights reserved.