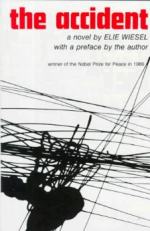 "They had known how to fight hunger, conquer fear, and outmaneuver the myriad perils that had plagued them during the reign of Night. But once the world had more or less returned to 'normal,' they gave up." Preface

"You see, Doctor, what people say is true: man carries his fiercest enemy within himself." Section 1, pg. 22

"To talk to a stranger is like talking to stars: it doesn't commit you." Section 4, pg. 45

"Suffering brings out the most cowardly in man. There is a phase of suffering you reach beyond which you become a brute: beyond it you will sell your soul - and worse, the souls of your friends - for a piece of bread, for some warmth, for a moment of oblivion, of sleep. Saints are those who die before the end of the story. The others, those who live out their destiny, no longer dare look...