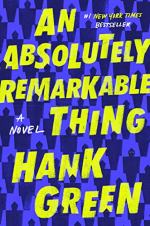 The following version of this book was used to create the guide: Green, Hank. An Absolutely Remarkable Thing. Penguin Group, 2018.

One late night on the streets of New York City, 23 year old protagonist April May encounters “AN ABSOLUTELY PERFECT AND REMARKABLE THING” (4). Once an art student herself, she stops to admire a large metallic robot structure standing on the sidewalk in front of a Chipotle and then calls her friend Andy to rush over. The two make a video of the statue, jokingly name it Carl, and upload it to YouTube. The next day, April wakes up to a plethora of emails missed calls, and she learns that there are 63 similar Carls dispersed throughout the largest cities in the world.

April is then subjected to a rigorous schedule of television interviews to discuss New York Carl, and it is during this time that she realizes that she likes having an audience pay attention to her. She finds an entertainment agent named Putnam, makes videos with Andy of life After Carl, and becomes obsessed with Twitter. Green uses the internet to connect his young audience to youthful April May and her new infatuation with social media. This is also the time that April lets the most stable intimate relationship of her life flounder as instead of focusing on the people who care for her, she actively promotes herself as the Carls’ personal campaigner. Throughout all of the hubbub, the Carls remain immobile on their assorted sidewalks the world over.

A materials science student with UC Berkeley reaches out to April after April claims that New York Carl felt warm. The two meet up in LA and take Hollywood Carl iodine and americium as an experiment. The robot’s right hand detaches itself and runs away, and is not seen again until months later when it saves April from an attempted shooting. At this moment, the right hand of every other Carl in the world disappears. Other than this singular incident, the Carls continue to be, so April believes, visitors observing the human race. Once April makes the claim that the Carls are good, she kicks off a rivalry with a group called the Defenders and their leader, Peter Petrawicki, who want to exercise caution regarding the Carls but who ultimately result to violence to defend their stance.

As the world debates the Carls’ motives, the majority of the planet contracts an infectious recurring Dream in which over 4000 individual puzzles release pieces of code once completed. Some of the puzzles are easy and can be completed by one person, but others connect people with diverse areas of expertise all around the world who would have never spoken to each other otherwise. It is for this reason that April thinks that the Carls are on Earth to observe human life and see if we can cooperate when working towards a common goal.

As April navigates the tumultuous new terrain of unexpected fame and the platform it provides her, the reader also witnesses the life of a normal girl with a tendency towards self-belittlement and the incapacity to accept love from another person. Green explores a number of topics in An Absolutely Remarkable Thing that correlate strongly with today’s society such as, predominantly through April, mental health awareness and the harm of self-deprecation. He also depicts ways in which too much social media can lead to the user’s demise. Feminism makes its mark on the novel, as well, through characters such as Maya, a sure-footed young black woman who acts as the pillar of both awareness and calm in the face of April’s anxiety, Miranda, whose specialties range from Mayan numbers to bossing around the Som app crew, to the female president of the United States.

Although An Absolutely Remarkable Thing is technically an alien invader novel, at its heart is a commentary on today’s society in the United States, our failures, and the steps we can take to strengthen our humanity and forge a new pathway into the future as a symbiotic human race.