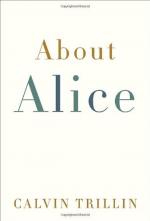 Calvin Trillin
This Study Guide consists of approximately 17 pages of chapter summaries, quotes, character analysis, themes, and more - everything you need to sharpen your knowledge of About Alice.

About Alice Summary & Study Guide includes comprehensive information and analysis to help you understand the book. This study guide contains the following sections:

This detailed literature summary also contains Topics for Discussion and a Free Quiz on About Alice by Calvin Trillin.

About Alice by Calvin Trillin is a touching memoir about the author's wife, Alice. After his wife's death, the author received many touching notes of condolences from friends and readers alike. Trillin answers these notes with this poignant look at the woman with whom he shared nearly forty years of his life. The book is both humorous and moving, allowing the reader a peek at the woman Trillin feels was his companion, his teacher and his muse.

Calvin Trillin opens his memoir by quoting a few of the condolence notes his friends and readers sent to him after his wife died six years earlier. Even though Trillin is touched by these notes, he realizes that most of these people did not know the real Alice. Alice appeared in many of his writings, which gave the impression that Alice was a straight-laced, opinionated woman, but, in reality, there were so many facets to her personality that Trillin cannot describe them all. Trillin met Alice at a party and spent the evening trying to impress her. Trillin admits that he continued to try to attempt to impress Alice for the rest of their marriage, even though Alice often teased him by saying that Trillin was never again as funny as that first night.

Alice was a beautiful woman, who often benefited from her looks. Alice never got a speeding ticket as a young woman, and it seemed that at every party they attended together, Alice was cornered by one man or another. However, Alice suffered because of her beauty as well. Trillin felt Alice was never completely happy with who she was as a person due to her difficult childhood. Alice's father was an optimistic man who lived beyond his means and never fully appreciated the difficulties of life. Alice was forced to mature at a faster rate and was often left with feelings of insecurity. As an adult, Alice had to care for her parents as though she had become the parent. Although Alice was happy to care for her parents, Trillin felt it cost her small pieces of her self esteem.

Alice was highly educated in the written word and pursued a career in education. Due to this, Trillin would often have Alice critique his writing. Although warned that this would cause tension in his marriage, Trillin continued to ask Alice's help because a small part of him felt as though every time she approved of his work, he moved up a peg in her estimation of him. Trillin wrote for Alice, and Alice was his muse. Additionally, Trillin felt it lucky that he was a writer, so he did not depend on Alice to impress co-workers or bosses. Trillin thought that if he were a corporate employee, he would be stuck at middle management his entire career because Alice had strong political convictions and she never shied from sharing them, no matter who she might offend.

Alice did not worry about finances and did not care about material objects; however, Alice often spent money more freely than Trillin. Alice felt that a nice home was essential to happiness, and she enjoyed expensive clothing. Trillin and Alice would occasionally argue over money matters, usually when she wanted to spend more and Trillin did not. However, Alice always had a way of convincing Trillin to agree with her, often by pointing out just how lucky they were compared to others.

In 1976, Alice was diagnosed with lung cancer. Alice's chances of survival at the time were slim. Years later, Alice wrote an article expressing her fears of dying and leaving Trillin to raise their children alone. Trillin agreed with her assessment of the situation, knowing that without their mother his daughters would not have become the women they eventually became. When it appeared the cancer had come back in the early nineties, Alice felt it would be okay to leave her daughters because they had already benefited from her wealth of wisdom. However, the idea of leaving them before seeing them happily married made Alice change her mind. Luckily, the cancer had not come back. However, several years after their youngest daughter had married and weeks before the oldest was to walk down the aisle, Alice learned she had heart disease. The radiation therapy she had received for her lung cancer had damaged her heart. Alice survived surgery in order to see her eldest daughter get married, then died four months later. Trillin knew Alice would have viewed the extra twenty-five years they had together as a gift. That was the Alice Trillin he knew.

More summaries and resources for teaching or studying About Alice.

About Alice from BookRags. (c)2022 BookRags, Inc. All rights reserved.