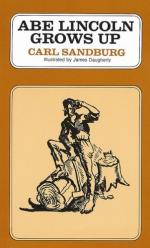 Carl Sandburg
This Study Guide consists of approximately 66 pages of chapter summaries, quotes, character analysis, themes, and more - everything you need to sharpen your knowledge of Abe Lincoln Grows Up.

The following version of this book was used to create the guide: Sandburg, Carl. Abe Lincoln Grows Up. Houghton Mifflin Harcourt, 1975.

In 1776, Abraham Lincoln was a captain of militia in Rockingham County, Virginia. He married Bathsheba Herring and had five children, one of them being Tom Lincoln. Abraham Lincoln was persuaded by his friend Daniel Boone to move his family through the Wilderness Trail in 1782 to Kentucky, the American frontier. The culture of the settlers was rife with violence and prejudice. Abraham Lincoln was shot by a Native American shortly after the family arrived. His son, Tom Lincoln, grew to be a respectable, reliable man. He made money working on various farms and settled in Elizabethtown, Hardin County, Kentucky. There he joined the Methodist church branch against slavery, and married Nancy Hanks in 1806. The two moved to a farm outside of town where they had their first child, Sarah, and were happy.

In 1807, the Lincolns moved to Rock Spring farm, and on the morning of February 12, 1809, Abraham Lincoln was born. He was named after his paternal grandfather. Tom and Nancy Hanks worked hard to provide and care for their family. He learned there that Kentucky was one part of the American nation, and he contemplated meanings of complex words. He attended school two miles away, and met various passers-by traveling “the Louisville and Nashville pike” (43). The wilderness of the frontier was unforgiving, and their family experienced both times of abundance and scarcity.

In 1816, the land Tom owned in Kentucky was no longer legally his. He decided to move the family to Little Pigeon Creek farm, Spencer County, Indiana. Slavery was illegal in Indiana, and it was rumored to be fertile land. Abe helped his father build both their makeshift and permanent cabins, learning how to use an ax. The American landscape was rapidly expanding during this time. The country gained territory, flocks of people arrived on its shores, and the Napoleonic empire fell. Meanwhile, Abe decided he would never shoot game again after his first kill with a rifle. He walked nine miles each way to attend school with his sister, which his mother advocated for. Nancy Hanks and her adopted parents died at Little Pigeon Creek farm from “milk sick,” which ran rampant among people and livestock (86). Abe asked a Methodist elder to speak over his mother’s grave.

Tom traveled back to Elizabethtown to ask for Sally Bush Johnston’s hand in marriage after Nancy Hanks’s death. He paid her late husband’s debts, and she traveled back to Little Pigeon Creek farm with him and her three children. Abe liked his step-mother, and she also advocated for his education. Abe grew into a strong, skilled, and sensitive young man. He spent many months of many years alone in the wilderness axing timber. He helped members of his community with his strength, and he honed a respect for the natural world. Abe proved himself honest and fair, like when he worked to pay for a borrowed book he damaged. He was humorous, but always took responsibility for his actions, like when he joked with Sally Bush. Furthermore, he was truthful and cared about others.

The settlers were religious people faithful to Christian denominations like Catholicism and Protestantism. The teachings from the Bible preached in church were the source of their morality and motivations, which was also true of Abe. Their religion gave them accepted roles for each family member, and explained what happened beyond their immediate experiences. The settlers had various ancestral lines and brought with them superstitions of old. They relied on these superstitions to make what they believed were informed decisions. They searched for patterns in experiences to find answers to the unexplainable. They also shared songs and rhymes for entertainment.

Abe was an active reader and writer. He sought out books and asked questions of their information. He used what he learned through reading to inform his everyday life, and even help others in his community. At age 17, Abe began working at Anderson Creek ferry. There, he met more kinds of travelers, especially tough pioneer men. He built his own flatboat to take passengers to the middle of the Ohio River. When he was taken to court for his entrepreneurship, he was inclined to learn more about legislature. Though he wanted to attend a new, nearby university at 19, his father promised he would transfer goods down the Mississippi River to trade in New Orleans. He made the dangerous three-month trip and was exposed to more cultural diversity than he had ever witnessed, including slavery. Abe read the newspaper and was interested in both local and national politics. He followed the happenings of Congress, and especially the election of Andrew Jackson to the Presidency. He learned from the controversial political landscape, and supplemented it with political theories and otherwise from the Founding Fathers and many more.

Johnny Appleseed and John James Audubon were described as examples of exceptional pioneer men who cared for others. Abe Lincoln and his family moved again to Macon and Coles Counties, Illinois, where he was sent again to New Orleans on a trading trip down the Mississippi River. He saw more regarding slavery than ever before, including an auction. he passed the town of New Salem on the Sangamo River, and the novel ended with his goodbyes to his family before he ventured there.

More summaries and resources for teaching or studying Abe Lincoln Grows Up.