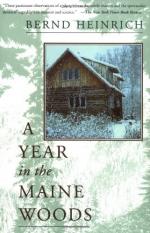 A Year in the Maine Woods Summary & Study Guide

Bernd Heinrich
This Study Guide consists of approximately 30 pages of chapter summaries, quotes, character analysis, themes, and more - everything you need to sharpen your knowledge of A Year in the Maine Woods.

A Year in the Maine Woods Summary & Study Guide Description

A Year in the Maine Woods Summary & Study Guide includes comprehensive information and analysis to help you understand the book. This study guide contains the following sections:

This detailed literature summary also contains Topics for Discussion and a Free Quiz on A Year in the Maine Woods by Bernd Heinrich.

A Year in the Maine Woods begins in late May, when the author drives from his home in Vermont to a cabin in the Maine woods to spend one year observing the plants and animals of that region. He takes only his pet raven, Jack, along with him. When he arrives he takes stock of everything he wants to accomplish before the winter. He must winterize his cabin, build an outhouse, chop wood for the winter, build an aviary for his captive ravens, plant a garden, build a maple syrup tapping station, and get into marathon-running shape. While doing all these household chores, he also takes time to observe the ravens, beetles, trees, and other wildlife that all make their home near his cabin. Jack begins to gain independence and by the late summer, he flies off and does not return home. He is no longer a pet but simply one of the many ravens in the woods.

As summer fades to fall, the author goes on berry picking adventures that lead him farther and farther away from his cabin. Along the way, he is always observing and noticing the animals and the changing of the seasons. He frets that he has not done enough to prepare for winter and forces himself to work harder to accomplish all he has set out for himself. During the late summer his son, Stuart, comes for a visit. The two spend a lot of time with each other simply going on walks, picking berries, or listening to the sounds of the night. While on one of his walks, he stumbles into a forested area that had been clearcut by loggers many years before. He observes that in the absence of the large old growth trees, the smaller trees are growing at a rapid pace. Soon this area of the forest will look no different than a pristine spot that had never been cut.

When the Christmas season comes around, the author has a bit of nostalgia and dreams of having an old-fashioned Christmas for disadvantaged children at his cabin on the hill. Unfortunately, though he visits his old school and offers his idea to the headmaster, they are not interested in an old-fashioned Christmas. Late in December, the author holds a short intensive Winter Ecology class at his cabin in the woods. His students arrive and he takes them on walks and excursions through the countryside. In late winter, there is a huge snowstorm that dumps many feet of snow on the area. The author still manages to go out into it to make sure his ravens have access to the meat carcasses he leaves them.

As spring comes, the author sets about making a maple syrup operation with his neighbor. While the author is placing his taps in the trees he notices some curious behavior from a red squirrel. He discovers that red squirrels can also make maple syrup using only their teeth and the perfect temperature of a spring day. The author spends a lot of time examining the seeds of the birch and maple trees in the area. He is curious as to why all the birch and sugar maple trees have decided not to blossom and produce seeds that year. At the end of the book, the author goes back to Vermont to attend his daughter and one of his student's graduations. Though it is the first time he has gone to a graduation, he is pleasantly surprised that he actually enjoys the experience. The books ends with the author back at the cabin and his young son happily following in his father's footsteps.

More summaries and resources for teaching or studying A Year in the Maine Woods.

A Year in the Maine Woods from BookRags. (c)2022 BookRags, Inc. All rights reserved.