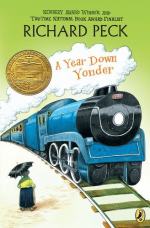 Plot Summary
+Chapters Summary and Analysis
Prologue, and Rich Chicago Girl
Vittles and Vengeance
A Minute in the Morning
Away in a Manger
Hearts and Flour
A Dangerous Man
Gone with the Wind, and Ever After
Free Quiz
Characters
Objects/Places
Themes
Style
Quotes
Topics for Discussion
Order our A Year Down Yonder Study Guide

Richard Peck
This Study Guide consists of approximately 26 pages of chapter summaries, quotes, character analysis, themes, and more - everything you need to sharpen your knowledge of A Year Down Yonder.

A Year Down Yonder Summary & Study Guide includes comprehensive information and analysis to help you understand the book. This study guide contains the following sections:

This detailed literature summary also contains Topics for Discussion and a Free Quiz on A Year Down Yonder by Richard Peck.

A Year Down Yonder is about a Chicago girl's year-long stay with her grandmother in a rural town during the height of the Great Depression. The town is full of eccentric personalities, not the least of which is the grandmother.

The narrator is fifteen-year-old Mary Alice, who is forced to live with her Grandma Dowdel in a small rural town in southern Illinois because her parents cannot afford to keep her. Mary Alice dreads being stuck in a hick town, and she is afraid of her imposing, stern grandmother.

Grandma immediately enrolls Mary Alice in school, and she is placed in Miss Butler's class. A bully, Mildred, calls Mary Alice the "rich Chicago girl" and rides home with Mary Alice in order to force her to give Mildred a dollar. Grandma bullies the bully by unhitching Mildred's horse and forcing the girl to walk home without shoes.

At Halloween, Grandma pranks a gang of pranksters by dousing their leader in warm glue when they try to vandalize her cobhouse. Grandma then saves an otherwise boring school Halloween party by bringing a load of pecan and pumpkin pies. Next, Grandma and Mary Alice attend a turkey shoot on Armistice Day at the Abernathy farm. Grandma charges exorbitant fees for cups of burgoo stew at lunch, and it is only later revealed that all the proceeds from the stew go to Mrs. Abernathy to help care for her war-wounded, invalid son.

Next up is the annual Christmas program at school, and Mary Alice is chosen to play the Virgin Mary in the Nativity scene. Mary Alice doesn't think Grandma likes Christmas, and she doesn't expect any gifts. Grandma surprises Mary Alice by buying her new shoes, making her a beautiful tin halo to wear in the play, and paying for Mary Alice's cherished brother Joey's train ticket for a visit.

Around Valentine's Day, Grandma hosts a Daughters of the American Revolution (DAR) gathering at her home, and puts the haughty DAR leader, Mrs. Weidenbach, in her place by indirectly revealing that Weidenbach does not have the noble blood that she claims, but the blood of the local, looked-down-upon hooligans, the Burdick family. Meanwhile, Mary Alice develops feelings for a new boy at school, Royce McNabb.

Grandma takes on a tenant, the artist Arnold Green. A woman named Maxine Patch poses nude for Arnold in Grandma's attic as a way to seduce him. The snake Grandma keeps in the attic to keep away birds falls on Patch, and she runs from the house screaming, wearing nothing but the snake. After that, Grandma and Mary Alice survive a fierce tornado, and then they go to check on and rescue a couple of the elderly residents of the town.

The end of the school year comes, and Mary Alice has to return to Chicago, even though she does not want to leave. Royce and Mary Alice agree to be pen pals, and in a brief Epilogue, the two are married several years later.