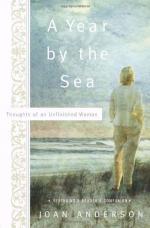 A Year by the Sea: Thoughts of an Unfinished Woman Summary & Study Guide

Joan Anderson
This Study Guide consists of approximately 29 pages of chapter summaries, quotes, character analysis, themes, and more - everything you need to sharpen your knowledge of A Year by the Sea.

A Year by the Sea: Thoughts of an Unfinished Woman Summary & Study Guide Description

A Year by the Sea: Thoughts of an Unfinished Woman Summary & Study Guide includes comprehensive information and analysis to help you understand the book. This study guide contains the following sections:

This detailed literature summary also contains Topics for Discussion and a Free Quiz on A Year by the Sea: Thoughts of an Unfinished Woman by Joan Anderson.

"A Year By the Sea: Thoughts of an Unfinished Woman" tells of the author's real-life spiritual journey over the course of a year. Joan Anderson decided that she needed a year apart from her husband of many years and stayed alone in their Cape Cod cottage for a year, getting to know herself again. She learned many things about herself, and her husband decided to come live with her, making big changes in their marriage.

When Joan's husband took a new job that required a cross-country move, Joan realized that she did not feel like dutifully following her husband any more. Instead, she moved alone to their Cape Cod vacation cottage, where she could reminisce about her childhood and try to figure out where she had gone wrong. She knew that her marriage was boring and stale and she was tired of always shouldering the domestic, social, and emotional responsibilities for the whole family. Joan knew that she had married young and foolishly, and had pushed her own two sons into a similar pattern. She felt that she had lost her sense of adventure and living in the moment. Joan could not decide if she wanted to be single or married, but she knew that her marriage was not fulfilling her as it was, and she knew she needed to really examine what she wanted from it.

Surrounded by nature, Joan felt revitalized. She loved walking or biking along the coastline, but her favorite activity was swimming with seals, or spending hours completely alone on a deserted sandbar. When she needed money, Joan got jobs working in a fish market, or digging for clams, and she was proud of her physical strength and capability, despite being in her fifties. As she made new friends, Joan gradually opened up more and more to having a social life again, and allowed several groups of people to come stay with her, including an independent film crew. Joan was even able to handle hosting her family's Memorial Day weekend get-together, but she had finally learned to let go and let others handle some of the details and cooking, so that she could relax.

After nearly a year, Joan's husband had also done a lot of thinking and growing, and he realized how much he missed being married to her. He decided to retire and move in with her at Cape Cod, but they both recognized that they must have their own individual space and not fall into old, destructive patterns. Joan agreed to let him back into her life, and shared with him her new friends, and some of the lessons nature had taught her. Joan looked forward to the adventures and growth that the future held for both of them.

More summaries and resources for teaching or studying A Year by the Sea: Thoughts of an Unfinished Woman.

A Year by the Sea: Thoughts of an Unfinished Woman from BookRags. (c)2022 BookRags, Inc. All rights reserved.