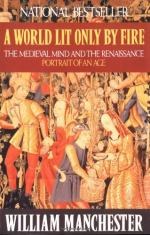 A World Lit Only by Fire: The Medieval Mind and the Renaissance: Portrait of an Age Summary & Study Guide

William Manchester
This Study Guide consists of approximately 28 pages of chapter summaries, quotes, character analysis, themes, and more - everything you need to sharpen your knowledge of A World Lit Only by Fire.

A World Lit Only by Fire: The Medieval Mind and the Renaissance: Portrait of an Age Summary & Study Guide Description

A World Lit Only by Fire: The Medieval Mind and the Renaissance: Portrait of an Age Summary & Study Guide includes comprehensive information and analysis to help you understand the book. This study guide contains the following sections:

This detailed literature summary also contains Topics for Discussion on A World Lit Only by Fire: The Medieval Mind and the Renaissance: Portrait of an Age by William Manchester.

A World Lit Only By Fire is William Manchester's attempt to write a book of popular history defending the increasingly unpopular view among historians that the medieval world was culturally, religiously, and technologically backward. This world was destroyed by the blossoming of confidence in reason and the progress of art, literacy, astronomy, geography, and theology. The book is divided into three chapters. The first chapter introduces Manchester's conception of the medieval mindset. The second chapter includes a lengthy discussion about how this mindset was continuously challenged by a number of individuals and movements. Finally, the last chapter explores in detail the adventure of Ferdinand Magellan whom Manchester believes shattered the medieval mind and heralded the coming of modernity.

In Chapter I, The Medieval Mind, Manchester quickly and polemically describes the period from 400 A.D. to 1400 A.D. as the "Dark Ages" even though this term is not used in scholarly research. His claim is that the medieval period saw an extreme decline in standards of living, not only due to crumbling political institutions and infrastructure but to disease, isolation, and religious oppression. Manchester emphasizes just how savage medieval people were and how they imposed horrific punishments on one another. Despite Jesus' teachings, Christians butchers one another en masse. The conditions were so terrible that Manchester claims that the medieval West was not a civilization at all, but a decaying shadow of the Roman Empire. But by 1500 A.D. a number of medieval institutions sufficiently died back to allow a new mindset to arise.

Chapter II, The Shattering, details the intellectual movements that destroyed the medieval mind and the great figures who created and led them. The first movement was the Renaissance, where new art and ideas were widely circulated in Italy and then in other parts of Europe. It resulted partly from a rediscovery of the ideas of antiquity, derived from rediscovered records. Manchester scorns the medieval and Renaissance Popes but credits them for supporting the arts. The next movement was that of Renaissance humanism, with many great intellectuals educated themselves in the classic works of the ancient world. This led them to a new respect for reason and, despite the fact that many were devout Christians, their love of reason would ultimately be Christendom's undoing. The next movement was the Protestant Reformation which, while savage and dogmatic in its own ways, destroyed the grip the Catholic Church had on Europe and helped create the nation-state system.

One of the main currents of thought that changed the world is most discussed in Chapter III, One Man Alone. The exploration of the world brought many new ideas to Europe, most important of which were the many bits of evidence that they were not the pinnacle of civilization and that societies could flourish apart from the Christian religion. The greatest of these explorers was Magellan, whose voyage (that he himself did not complete) proved that the earth was round and that vast stretches of land and peoples existed that were in direct contradiction to the understanding of Christianity that prevailed at the time. This was the body blow to medieval Christendom and the birth pangs of the glorious, secular modern world.

More summaries and resources for teaching or studying A World Lit Only by Fire: The Medieval Mind and the Renaissance: Portrait of an Age.

A World Lit Only by Fire: The Medieval Mind and the Renaissance: Portrait of an Age from BookRags. (c)2022 BookRags, Inc. All rights reserved.