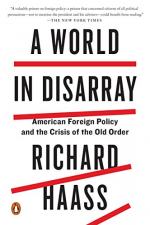 Why does Haass insist on using the word “disarray” to describe the current international situation? Why did he reject other options, such as “anarchy” and “chaos?”

This helps understand the importance of Haass's word choice and demonstrates his view that the current international situation could deteriorate further.

What is sovereignty? When was and how was is established? What does Haass believe is its role in modern foreign policy?

This aids in understanding the principle of sovereignty, which is foundational to modern international relations and all of Haass's arguments.

Why, in Haass’s view, was the Cold War a relatively peaceful period of history? What significant differences exist between Cold War dynamics and the current world order?

This demonstrates Haass's view that a bipolar order, even one based on hostility, is more stable than the non-polar world we currently live in.

What is the Thucydides trap? How does Haass propose to avoid it in the cases of China and Russia?

A World in Disarray: American Foreign Policy and the Crisis of the Old Order from BookRags. (c)2022 BookRags, Inc. All rights reserved.