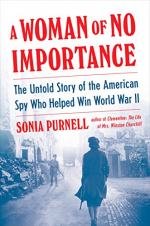 Summary
+Chapters Summary and Analysis
Prologue - The Dream
Cometh the Hour
My Tart Friends
Goodbye to Dindy
Twelve Minutes, Twelve Men
Honeycomb of Spies
Cruel Mountain
Agent Most Wanted
Scores to Settle
Madonna of the Mountains
From the Skies Above
The CIA Years - Epilogue
Important People
Objects/Places
Themes
Styles
Quotes
Topics for Discussion
Order our A Woman of No Importance Study Guide

A Woman of No Importance Summary & Study Guide

Sonia Purnell
This Study Guide consists of approximately 80 pages of chapter summaries, quotes, character analysis, themes, and more - everything you need to sharpen your knowledge of A Woman of No Importance.

A Woman of No Importance Summary & Study Guide Description

A Woman of No Importance Summary & Study Guide includes comprehensive information and analysis to help you understand the book. This study guide contains the following sections:

This detailed literature summary also contains Topics for Discussion on A Woman of No Importance by Sonia Purnell.

The following version of this book was used to create this study guide: Purnell, Sonia. A Woman of No Importance: The Untold Story of the American Spy who Helped Win World War II. Viking – an Imprint of Penguin Random House LLC. 2019. First Hardcover Edition.

The book’s perspective is essentially journalistic and objective, chronicling key events and defining circumstances in the life and work of Virginia Hall, one of the most important figures in the history of American (and international) military intelligence. The book begins with a Prologue that summarizes Virginia’s perspective, her impact on the outcome of World War II, and her impact on the development of military intelligence practices. It also includes references to the various challenges encountered by the author while researching Virginia’s history.

The narrative proper then begins with a description of Virginia’s upbringing: of her supportive father, of her demanding mother, and of her own powerful intentions to live life on her own terms. There are descriptions of how doing just that led her into the United States diplomatic services; how an accident while she was posted in Turkey led to her needing to have an artificial leg; and how, as World War II began, Virginia began her career as an intelligence agent in France, a country she had come to live while studying there.

The next several chapters detail events in Virginia’s career: her efforts at gathering information about the Nazis and transmitting it to her handlers in England; her efforts to find and recruit people to join the French Resistance; and her constant awareness of, and avoidance of, the dangers associated with her work. There are also references to her almost constant efforts to receive acknowledgement and respect from both her male superiors and her male comrades; to the various enemies she made in the Nazi regime, who hated her and wanted to see her dead even though they had no idea who she actually was; and to her capacity for loyalty and compassion towards those with whom she worked.

A couple of Virginia’s more significant achievements get particular attention. There is, for example, a detailed recounting of the detailed plans she made to help a dozen Resistance agents escape a notoriously deadly German prison. There are also recounting of the range of agents she managed to recruit: from nuns to circus performers, from prostitutes to respected physicians, from young boys to senior leadership in police circles. The book also describes how, when she risked becoming too well-known and being captured, Virginia made an extremely difficult journey of escape into Spain; how she was eventually recruited by the American intelligence service to resume her work; and how her efforts, combined with those of her many Allies across France, contributed significantly to the eventual German defeat, and to the freeing of France.

After the war, the narrative suggests, Virginia struggled to find a place for herself in the reworked American intelligence community. She eventually got a job with the fledgling Central Intelligence Agency (CIA), at times being both resented and resisted by male superiors, even though she had much more actual experience than many of them but eventually proving herself. She married her long-time lover; continued to do what work she was allowed to do well; and eventually retired at the age of sixty. She lived, narration reveals, for another sixteen years, receiving several honors both while she was alive and in the aftermath of her death, honors that recognized her skills, her contributions, and her dedication to the cause of peace.

More summaries and resources for teaching or studying A Woman of No Importance.

A Woman of No Importance from BookRags. (c)2022 BookRags, Inc. All rights reserved.