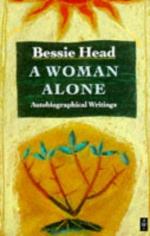 Bessie Head
This Study Guide consists of approximately 23 pages of chapter summaries, quotes, character analysis, themes, and more - everything you need to sharpen your knowledge of A Woman Alone.

This detailed literature summary also contains Topics for Discussion and a Free Quiz on A Woman Alone: Autobiographical Writings by Bessie Head.

A Woman Alone is a series of autobiographical writings by Bessie Amelia Head (1937-1986), who is widely considered to be the finest Botswanan writer of the twentieth century. Born the child of a wealthy South African white woman and a black servant who tended to the woman's family's race horses, Head's birth is apparently considered a scandal. In 1937 in Pietermaritzburg, Natal, South Africa, deep racism is a fact of life and so Head's existence has to be hidden. Head knows little about her family save that she is told as a little girl that her mother is mentally ill and has had a mental break down and that her mother shares her name.

At age twelve, Head ends up at an Anglican boarding school for black girls which changes her life. While not caring for the religion or discipline, she loves the world of books and spends much of her time there. When Bessie is fourteen she is cruelly told that she is the product of an interracial marriage and that her mother is insane, a terrible burden at the time which leads her to become deeply sensitive to issues of race and discrimination.

Bessie becomes a teacher and aware of the political and racial problems in South Africa; eventually feeling she is on the verge of a mental breakdown. in 1958 she becomes a journalist, becoming even more aware of the evils of South African apartheid. While she is only tangentially involved in politics, Head is never very successful and after marriage and a child she decides that she wants to leave South Africa. The only way that the government will let her leave, however, is if she accepts an exit permit, barring her from coming back. Thus, Head comes to live in Serowe, Botswana for the rest of her life. She will live there for almost twenty years before she gains citizenship. While she describes her life as peaceful, she has a number of mental troubles that she deals with through her work.

A Woman Alone tells Head's story above through a number of short articles and essays that the reader can use to piece together a single narrative. One also gets a feel for Head's philosophical sensibilities. Growing up without a family, interracial and eventually without a country, Head has a Universalist perspective, trying to rise above divisions between human beings. She resists being called an "African," "black," "feminist" or "revolutionary" writer. While she has a combative, rude, and even "violent" personality, Botswana brings Head a deep sense of peace. She loves the "ancient order" of Botswana, uninterrupted by imperialism. She focuses on racial issues and South African politics, along with the psychological trauma of divisions among human beings. She is also a deeply spiritual person; while admiring some aspects of Christianity; however, she is more attracted to Hinduism and indigenous African religions.

More summaries and resources for teaching or studying A Woman Alone: Autobiographical Writings.