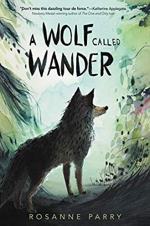 This detailed literature summary also contains Quotes and a Free Quiz on A Wolf Called Wander by Rosanne Parry.

Wander's first memories are the smells of the tunnel where he and his four siblings are born. The most important wolf in his life is Mother, who occasionally leaves the tunnel and returns with the scents of things that Wander has yet to experience. Wander and his siblings, Sharp, Warm, Pounce, and Wag begin to establish themselves within their family, with Sharp always the largest and strongest and Warm the one that Wander always turns to for comfort. Wander's life is secure within the tunnel; but, he longs to go outside, even though Mother has given them strict instructions not to cross the entrance of the tunnel.

One day, Wander is venturing just past the entrance when a large male wolf appears. His voice prompts Wander to bow, though he does not understand the instinct. The wolf is Growl, the only adult male of their pack other than Father. Growl was injured in a fire and has the task of helping watch over the pups. He soon begins to teach them, and a lesson about wildfire is later instrumental in saving Wander's life. Father arrives and formally lays claim to each pup. As Wander becomes more determined to become a leader himself, he spends more time with Father, who teaches him about their world. He is never to touch the skunk, and the porcupine is an animal that commands respect. Elk is their food of choice. Father is dismissive of smaller game, as he believes they are beneath the notice of a true wolf.

When Wander is a couple of of years old, Mother introduces another litter of pups. Wander soon identifies one as his favorite and takes special care that she gets enough food. One day, the pack is involved with the pups and does not notice the approach of a rival pack. That fatal mistake leads to the deaths of Father and Growl and sends the others scattering. Wander is injured when he tries to take down an elk on his own. He briefly meets up with Warm, who is also injured. They are soon separated from each other. Wander knows that Warm is probably dead, and he begins to travel.

Over the next month, Wander journeys through a prairie – much different from the mountain area where he grew up. He has the company of a raven for awhile, and the bird helps him find food and water. However, the raven soon joins a “pack” of ravens. Though Wander is lonely, he does not blame the raven. Wander faces other dangers, including a highway, thirst, hunger, and a wildfire that sends him and all the other animals racing for their lives. After being alone for weeks, Wander finds a long black wolf, a female who introduces herself as Night. Night wants to know that Wander will provide for her, and he pledges to do so. He knows that he would do anything to protect her. She soon slips away to have pups in a tunnel, and Wander brings her food while she tends their young. He realizes that he has what he had longed for – a pack of his own.