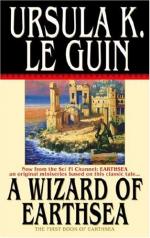 Ursula K. Le Guin
This Study Guide consists of approximately 43 pages of chapter summaries, quotes, character analysis, themes, and more - everything you need to sharpen your knowledge of A Wizard of Earthsea.

A Wizard of Earthsea Summary & Study Guide includes comprehensive information and analysis to help you understand the book. This study guide contains the following sections:

This detailed literature summary also contains Quotes and a Free Quiz on A Wizard of Earthsea by Ursula K. Le Guin.

The story begins in Ged’s childhood and follows him through his journey to become a wizard and his quest to defeat the evil shadow creature he accidentally unleashes into the world.

The novel starts with Ged in his village on the island of Gont. Ged is the son of a widower bronze-smith, and his mother died when he was not even a year old. Early in his life, Ged’s aunt realizes he possesses the power to be a great wizard and begins teaching him what she knows of magic. Eventually, the Mage of Re Albi comes to Ged’s village and takes him as an apprentice, to teach him all he can about sorcery. Ged’s pride and impatience led him to leave his master Ogion, the Mage of Re Albi, and instead to learn his wizardry at the school in Roke.

While at the school in Roke, Ged blossoms, becoming one of the best students in the school. Again, his pride and arrogance cause strife and competition between him and his fellow students, specifically an older student named Jasper. One night, while trying to show Jasper up, Ged attempts a spirit-summoning spell beyond his skill level. He cannot control the spell and lets loose an evil shadow creature that attacks him. In order to save Ged from the shadow, the Archmage (the head of the school) sacrifices his life. It takes Ged months to recover physically from the shadow attack but much longer for him to recover emotionally.

Ged finishes his time at Roke, learning all he can in order to keep him safe from the shadow which he knows is constantly searching for him, trying to find him to possess him and take his life force. Upon earning his wizard staff, Ged leaves to become the wizard for the township of Low Torning on a nearby isle which needs protection from dragons.

In Low Torning Ged comes face to face with the shadow while he is trying to save the life of a local child. Although Ged escapes from the shadow, he knows he must leave Low Torning for his safety and the safety of the people there. But before he leaves he must take care of the dragons that are a danger to the people, so Ged sets off for the Isle of Pendor. On Pendor, Ged kills several of the young dragons before he finally gets to speak with the elder dragon. Ged gets the elder dragon to agree never to fly west to Low Torning or the Archipelago and thus ensures the safety of the people.

Once Low Torning is safe Ged starts his journey. He bounces between many places eventually making his way to Osskil where he has heard of a sword that might help him defeat his shadow. On Osskil, he is attacked once more by the shadow that has taken possession of his travel companion’s body. Ged flees again and comes to safety at the Court of Terrenon. At the Court of Terrenon, Ged meets Serret, the Lady of the Court. He soon discovers the Court holds an ancient stone with a dark spirit in it and Serret has lured him to the court to use his powers to control the stone. Serret wants Ged to become a slave to the stone and to her. He flees the court and ends up back on Gont in the village of his old master Ogion.

Ogion finds Ged and takes care of him for a few days. Ogion reassures Ged telling him he is strong enough to conquer the shadow but he must become the hunter not the hunted. With the advice of his true master, Ged leaves Gont to pursue his shadow.

Ged’s hunt leads him to Iffish, the island where his school friend Vetch is from. While on the island, Ged runs into Vetch who convinces Ged to stay with him. Ged meets Vetch’s sister Yarrow, who he very much enjoys, and Vetch’s younger brother Murre, whose easy life Ged envies. Once Ged has told Vetch of all his recent struggles and his quest to hunt the shadow, Vetch decides to join Ged on this journey. Together the two friends leave Iffish toward the Open Sea in pursuit of the shadow.

Ged and Vetch travel past the Outer Reaches, farther into the Open Sea than any other person has travelled. Eventually, they stop when they have reached a seemingly invisible land that only Ged can see. On this invisible island, Ged faces his shadow. He speaks the shadow’s true name which is the only way to control the shadow. The name Ged speaks is his own and at once the shadow and Ged join together to become one. Vetch is horrified, thinking his friend has become possessed by the shadow. As soon as Ged and his shadow are united, the balance of the earth is restored and the invisible island disappears, becoming the sea once again. Vetch and the dazed Ged make their way back to Earthsea. When Ged finally speaks, he tells Vetch everything has been restored, he is a whole man again and his wound is healed. After a few more days of travel, Vetch and Ged make it back to Iffish where they find Yarrow waiting for them.

More summaries and resources for teaching or studying A Wizard of Earthsea.

A Wizard of Earthsea from BookRags. (c)2022 BookRags, Inc. All rights reserved.