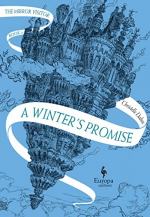 Christelle Dabos
This Study Guide consists of approximately 40 pages of chapter summaries, quotes, character analysis, themes, and more - everything you need to sharpen your knowledge of A Winter's Promise.

This detailed literature summary also contains Quotes and a Free Quiz on A Winter's Promise by Christelle Dabos.

The following version of this book was used to create this study guide: Dabos, Christelle. A Winter’s Promise. Europa Editions, 2018.

God had split the world into pieces called arks due to his frustration with a mysterious book. Ophelia lived on the Ark of Anima, where she owned a museum and used her powers to read the history and souls of items. She visited her great-uncle in the Family Archives to tell him that the Doyenne and her mother had arranged an engagement for her with a man from the Pole, another Ark with a reputation for ruthlessness and political plotting. She read the journal of her ancestors’ visit to the Pole in preparation for meeting her fiancé, Mr. Thorn. When Thorn arrived on Anima, he wore a large fur coat and was so tall that Ophelia thought he was a bear. He was callous and rude with her family, rejecting the feast her mother prepared for him and insisting to speak to Ophelia’s family spirit right away. The next morning, he announced that they must return to the Pole immediately and Ophelia had to abruptly depart from everything she had ever known.

Ophelia travelled to the Pole with Thorn and her Aunt Rosaline, as a chaperone. Thorn wanted Ophelia to pretend like she was not his fiancée. They arrived at Thorn’s Aunt Berenilde’s estate, where Ophelia and Rosaline would be staying. At dinner, Thorn mentioned to Berenilde that he had killed a man trying to assassinate him before he left for Anima. This statement shocked Rosaline and Ophelia and made them fear for Ophelia’s life at the Pole. That night, Thorn told Ophelia that he would be leaving and she must trust only Berenilde. Berenilde explained to Ophelia that, although Thorn had a high-status position as Treasurer, he was a bastard and therefore socially ostracized.

Ophelia wrote a letter to her family, pretending that everything at the Pole was pleasant. One evening, she snuck out of Berenilde’s estate to explore the Pole. She encountered Ambassador Archibald, who expressed his hatred of Thorn and intent to seduce Thorn’s fiancée. Ophelia concealed her identity by lying to him. On her way home, Ophelia met Thorn’s half-sister, Freya, who used her violent claw-like powers to harm Ophelia on the way back to Berenilde’s estate because she, too, hated Thorn. When Ophelia returned, Berenilde, Rosaline, and Thorn reprimanded her. Ophelia learned that Berenilde was pregnant with the baby of their family spirit, Lord Farouk. In the subsequent days, Berenilde sequestered Ophelia to her rooms. She used her claw power to make Ophelia suffer during their lessons. Later, Archibald visited Berenilde and told her that Farouk had ordered her to live with him at Clairdelune, so that Thorn could return to the Treasury. Ophelia and Rosaline would go with Berenilde, disguised as servants. Ophelia took on the identity of a mute, male valet named Mime.

At Clairdelune, Ophelia, under the guise of Mime, found a friend in Fox, another servant, who gave her advice about how to navigate the court as a servant. He taught her about sandglasses, which were rewards that nobles gave to them. Meanwhile, Archibald threw lavish parties regularly. Thorn visited one day and left a stamp behind. Ophelia went to the Treasury to return it to him. Thorn shared that someone must have intercepted all of the letters Ophelia had written to her family. When Ophelia left, she realized that Thorn had fallen in love with her, which upset her.

Attending a funeral, Ophelia brought Mother Hildegarde some oranges that Gail, another servant, had asked her to carry. Thorn’s grandmother helped Ophelia hold the basket of oranges. When Ophelia gave the noble the oranges, Hildegarde fell unconscious. Policemen arrested Ophelia for poisoning Hildegarde and beat her up. In the dungeons, Gustave, the head butler, blackmailed Ophelia into ensuring that Berenilde would lose her baby. Archibald released Ophelia after Mother Hildergarde wrote a note taking full responsibility for her allergic reaction to a spider bite. Gail visited Ophelia and told her that she knew Ophelia’s true identity. She shared her hidden identity as the last of the Nihilist clan with the power to cancel out the powers of others. Ophelia visited Thorn at the Treasury and told him that Hildegarde had lied about her allergic reaction and Thorn’s grandmother had poisoned the oranges. Thorn said that he would send his grandmother away from Clairdelune and take care of Gustave’s blackmail agenda. When Ophelia returned to her room, the Knight, a mysterious and dangerous boy, was waiting for her. He threatened her then erased her memory of their conversation. Gustave hanged himself. The Dragon family arrived at Clairdelune for the opera and hunt.

At the opera, Ophelia tried to find help for Rosaline, who was speaking strangely and unable to recognize her. She found Thorn, who wanted Ophelia to convince Berenilde not to go on the hunt. Ophelia admitted to him that she did not love him and did not want to sleep with him or have children with him. Thorn said he would still carry on with their marriage and that she must never speak of her intentions to anyone. Later, Ophelia confronted Berenilde, who admitted that Thorn wanted to use Ophelia’s power to decode Farouk’s Book. Ophelia felt betrayed. She had to sneak around because the Knight searched for her. Gail and Fox helped her and Rosaline. Thorn revealed that his entire family had been killed, likely by the Knight, during the hunt. Archibald extended protection to Berenilde’s child and Ophelia. Thorn became upset that Ophelia had accepted Archibald’s offer. He shared that Ophelia’s family was on their way to the Pole out of concern for her. Ophelia decided to take control of her life.

More summaries and resources for teaching or studying A Winter's Promise.