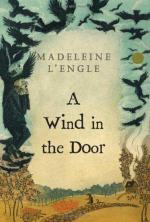 A Wind in the Door Summary & Study Guide

Madeleine L'Engle
This Study Guide consists of approximately 48 pages of chapter summaries, quotes, character analysis, themes, and more - everything you need to sharpen your knowledge of A Wind in the Door.

A Wind in the Door Summary & Study Guide Description

A Wind in the Door Summary & Study Guide includes comprehensive information and analysis to help you understand the book. This study guide contains the following sections:

This detailed literature summary also contains Topics for Discussion and a Free Quiz on A Wind in the Door by Madeleine L'Engle.

A Wind in the Door is the second in a four-part series of books by Madeleine L'Engle involving the Murry family. These timeless children's classics are remarkably ahead of their time in their use of cutting-edge science. L'Engle blends advanced scientific theory with spiritual mythology to create a magical yet oddly sensible world for her characters. Teenaged Meg Murry and her six-year-old brother, Charles Wallace Murry, are both highly intelligent, good-hearted children. Yet, their advanced knowledge of science, taught to them by their brilliant and famous scientist parents, leaves them feeling different and separated from their peers at school. As different as they are, they suffer all the normal childhood pangs and angst of trying to fit in with their peer group while remaining true to themselves.

In A Wind in the Door, Mrs. Murry, who holds two PhDs in biology and physics, is studying the microscopic mitochondria which exist within human cells and which all people need to survive. To Mrs. Murry's dismay, her young son Charles becomes afflicted with mitochondritis. Some mysterious force is killing off his mitochondria, and Charles may not survive. This microscopic plague is somehow linked to the mysterious cosmic star deaths, which her husband, Mr. Murry, is researching at the behest of the president of the United States. Meg, her boyfriend Calvin O'Keefe and Charles Wallace discover the link between these two strange phenomena when they meet Blajeny, a mysterious man who introduces himself as their Teacher. Also being taught by Blajeny are Sporos, a tiny farandola who lives inside Charles Wallace's mitochondria, and Proginoskes, a cherubim who looks like a drive of dragons.

The evil beings behind the cosmic and microcosmic destruction are called Echthroi. Echthroi exist to destroy; their goal is to un-create the universe. The Echthroi are responsible for all war, destruction and lack of communication throughout the universe. They find a foothold in Sporos and also in the un-likeable Mr. Jenkins, the principal at Charles' grade school. As Proginoskes explains to Meg, anyone who does not know who they truly are provides an opening for the Echthroi to do harm. Meg and Proginoskes are Namers. Their job is to help people know themselves better so that they will not become tools of the Echthroi. In order to keep both Sporos and Mr. Jenkins from siding with the Echthroi, Meg must find enough love in her heart to appreciate and recognize who these two individuals really are. As Blajeny teaches them, the balance of creation can hinge on something as large as the birth of a star or something as small as the life of a single child. Charles Wallace's survival is critical to the well being of the entire cosmos. In order to save Charles Wallace's life, Meg and her friends must save Sporos and Mr. Jenkins from the Echthroi. To succeed in these tasks, Meg must come to realize that love is the most powerful force in the universe.