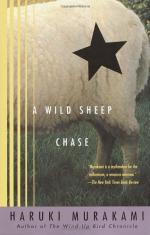 The novel is set initially in Tokyo, Japan, and begins with a phone call to the main character of the story, who remains unnamed. From that initial phone call, the story follows this man on his journey to find his own meaning of life, and an end to mediocrity, as well as to find a mythical sheep. The novel begins as the narrator of the story is phoned about the death of a young woman he used to know. He attends the funeral and recalls his relationship with her eight years previous. He had met her at a coffee shop while in college, and the two quickly began a sexual relationship, although now, he cannot remember her name without looking at the obituary.

This chapter, while short, introduces the...