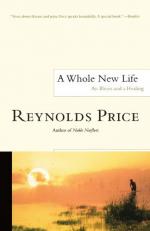 Reynolds Price
This Study Guide consists of approximately 23 pages of chapter summaries, quotes, character analysis, themes, and more - everything you need to sharpen your knowledge of A Whole New Life.

This detailed literature summary also contains Topics for Discussion and a Free Quiz on A Whole New Life by Reynolds Price.

Reynolds Price was fifty-one years old when he was struck with a devastating disease. He was a successful and renowned playwright, author and poet. Additionally, he had for years been part of the English Department faculty at Duke University where he taught writing classes and literary classes on icons such as Milton. He lived alone in a spacious, modern house on a large piece of wooded land on the outskirts of Raleigh, NC. Price was close to his brother, Bill, and his family and had many friends from around the country and world. He had fond memories of his deceased parents and childhood. There was really nothing to complain about. Price had led a happy and successful life and was still going strong.

At 51, Price was in relatively good health other than the usual things like farsightedness and creaking knees that one suffers from natural aging. However, Price began to notice strange sensations. He became extremely intoxicated from just one gin and tonic—his drink of choice that usually had little or no effect on him. He was late one day and told his legs to run but they could not. Price began to have trouble walking in a straight line without visibly wobbling. He feared he might have multiple sclerosis and that fear kept him from seeing a doctor for months after the symptoms first appeared. Finally, the symptoms became so severe that he was forced to see his doctor.

After extensive tests, Price was informed by his doctors that he had a tumor that was pencil-thick and that run almost the entire length of his spine. Surgery was his only option. After the day-long surgery, he was told that the tumor was malignant and that only ten percent had been removed, leaving the necessity for more surgery at a later time. Recovery was difficult. Even with the surgeon's careful hands in cutting away the malignant tumor, so many nerve cells were destroyed that these "dead" nerve endings caused excruciating pain to the point of being unbearable. Through more surgeries, more recoveries and more pain, Price finally had to face the reality that he was a paraplegic. Although the pain worsened, his senses that allowed for the mobility of his feet and legs were destroyed and lost forever.

It took Price literally years to recover and adjust to his new life. He was fortunate to have many friends who supported and helped him during these dark times. He was able to deal with his pain most effectively through biofeedback techniques and hypnosis. He overcame his depression brought on by his ordeal by throwing himself back into his work and actually emerged, in his words, a better person and a better and more productive writer. The account of the harrowing challenge that Price was made to face and endure, ends on the happy note that he views his life as a happy one and would not be willing to trade any part of it with anyone else. Every aspect of his life, good and bad, made him who he is.

More summaries and resources for teaching or studying A Whole New Life.