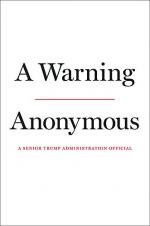 A Warning Summary & Study Guide includes comprehensive information and analysis to help you understand the book. This study guide contains the following sections:

This detailed literature summary also contains Topics for Discussion on A Warning by Anonymous.

The following version of this book was used to create this study guide: Anonymous. A Warning. New York: Hachette Book Group, 2019.

The book’s introduction opens with an anecdote concerning Trump’s petulant public insults against recently deceased U.S. Senator John McCain. The anecdote establishes some key elements of the book’s tone and continent. Specifically, the author seeks to highlight Trump’s profound personal flaws, moral bankruptcy, and lack of ability to lead. The author is a senior Trump official who has chosen to remain anonymous so that people cannot attack his/her character, and must instead engage with the facts and argument sin the book itself. In Chapter 1, the author highlights Trump’s inherently impulsive and reckless nature. Trump’s advisors must expend most of their energy on attempting to curb Trump’s destructive impulses. Unfortunately, Trump hates any form of disagreement or criticism, so he frequently fires people who express opposition to his ideas. The author considers himself/herself as a member of ‘the Steady State,’ a shrinking group of Trump advisors who consider it their duty to limit Trump’s destructive actions.

In Chapter 2, the author further examines Trump’s deep character flaws. The author states that Trump is petty, vindictive, dishonest, unintelligent, corrupt, and ineffective as a leader. The author provides substantial evidence for each of these claims. In Chapter 3, the author continues this examination by examining Trump’s general lack of principles. Trump is fundamentally self-serving. His political agenda has no substance or consistency, as his only real goal is to increase his power and popularity by whatever means necessary. Trump’s policies have already caused many deleterious effects on the state of the country.

In Chapter 5, the author discusses Trump’s backwards, destructive foreign policy actions. Trump has a deep—and deeply troubling—affection for oppressive dictators such as Kim Jong Un and Vladimir Putin. As a result, Trump often appeases and aids those dictators rather than attempting to limit the dictators’ international influences. At the same time, Trump frequently antagonizes allied nations and the leaders thereof. In Chapter 6, the author illustrates the deeply hostile, crass, and violent nature of Trump’s rhetoric. The dangers of Trump’s rhetoric is that is degrades the overall level of political discourse in the country, and it stokes dangerous mob mentalities.

In Chapter 7, the author examines the actions and motivations of Trump’s supporters in government. The author then implores all government official to more directly and openly oppose Trump. In Chapter 8, the author advocates against the reelection of Trump in 2020. The author argues that voting Trump out of office is the best and safest way of removing Trump. In the epilogue, the author recounts the story of United Airlines Flight 93. On September 11, 2001, when a group of terrorists tried to hijack the plane and fly it into the Pentagon, the passengers sacrificed their lives to take back control of the plane and fly it into a field. The author states that Americans must now exhibit similar courage in standing up to Trump.