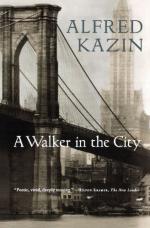 A Walker in the City Summary & Study Guide

Alfred Kazin
This Study Guide consists of approximately 30 pages of chapter summaries, quotes, character analysis, themes, and more - everything you need to sharpen your knowledge of A Walker in the City.

A Walker in the City Summary & Study Guide Description

A Walker in the City Summary & Study Guide includes comprehensive information and analysis to help you understand the book. This study guide contains the following sections:

This detailed literature summary also contains Topics for Discussion and a Free Quiz on A Walker in the City by Alfred Kazin.

This book is a memoir of growing up poor, Jewish and intellectual in a small, suburban American community in the early part of the 20th Century - specifically, in the years leading up to and during the Great Depression of the 1930s. The author contemplates and explores his feelings of not belonging in the world in which he lives or in the world in which he aspires to live. He explores themes relating to the nature of being an outsider, being Jewish, and being torn between life at home and life "beyond".

The narrative begins with the author's description of his return, as an adult, to Brownsville, the small community outside of New York City where he spent his childhood and youth. He comments on the sameness of some parts of the town, its people and its attitudes, and the substantial changes in others. He adds that in the present, as in the past, the community has the feeling of being the sort of place that people left to search elsewhere for their real lives.

As he moves further into the first section of the narrative (subtitled "From the Subway to the Synagogue"), the author begins book-long, in-depth considerations of his experiences of growing up Jewish, of his hardscrabble family life, and his longings for a life "beyond" the physical, spiritual, and moral constrictions of that which he lives in Brownsville. As part of those considerations, the author contemplates his experiences attending a Christian-oriented school, entering for the first time a Christian church, and coping with a speech impediment. A sense of ambivalence, of both positive and negative aspects to his experiences, enters the writing as the author discusses his relationships with his parents, life on the streets of Brownsville, and his considerations of Socialism. This last is particularly noteworthy in that Socialism was, at least in his youth, both a beacon of hope and a real chance that true equality and true freedom can be realized.

In the second section of the memoir, subtitled "The Kitchen", the author goes further into the metaphorical heart of his explorations as he describes life at the physical and emotional heart of his family, the kitchen of the family's home. Here he analyzes and comments on his relationship with his mother. Descriptions of his mother's friends hint at his emerging sexuality. He contemplates on the longings of these women for their home lives left behind in Europe. To him, this suggests that on some level, and in spite of their apparent intention to make the most of their new lives, they also feel as though someplace "beyond" those new lives is where they truly belong.

The third section of the memoir, The Block and Beyond, takes the narrative back outside the kitchen and the apartment into the larger Brownsville neighborhood, and also back into the author's contemplations of what triggered his dreams of life "beyond". Here, his contemplations focus more completely than anywhere else in the narrative on the relationship between the spiritual and social aspects of being Jewish, commenting on his simultaneous appreciation for the tenets of the faith and his distaste for the ways in which those who professed it actually practiced it. The life of art galleries and museums, he suggests, of walking to and from the city and the possibilities it represents, seems both more real and more meaningful to him than almost anything to do with his faith.

The fourth and final section of the memoir is subtitled Summer: The Way to Highland Park. The focus here is on the summer of the author's sixteenth year, a long, hot and humid summer of unexpected discoveries, many of which are triggered by his reading of a Christian New Testament and his contemplations of the life and teachings of Jesus. The narrative concludes with a description of his walking through a park on the outskirts of Brownsville with a good, clear view of New York City, and his realization that his profound longing for a real life "beyond", as opposed to the imagined life of his fantasies, is actually evolving into a sense of possibility.

More summaries and resources for teaching or studying A Walker in the City.

A Walker in the City from BookRags. (c)2022 BookRags, Inc. All rights reserved.