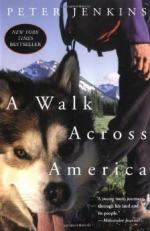 Peter Jenkins (travel author)
This Study Guide consists of approximately 26 pages of chapter summaries, quotes, character analysis, themes, and more - everything you need to sharpen your knowledge of A Walk Across America.

A Walk Across America Summary & Study Guide includes comprehensive information and analysis to help you understand the book. This study guide contains the following sections:

This detailed literature summary also contains Topics for Discussion and a Free Quiz on A Walk Across America by Peter Jenkins (travel author).

A Walk Across America is the true story of Peter Jenkins' attempt to find out the truth of what America is about. Peter starts his story out wondering if America is worth staying in or if it is to corrupt. He will go on a walk from Washington to Louisiana in order to answer his questions and find out about American and himself in the process.

The year is 1973 and Peter Jenkins is done with college. Peter believes that America is most likely the worst place to live in and decides he will abandon the country along with his dog, Cooper. When Peter voices his thoughts to an elderly janitor that Peter is friends with the old man becomes angry. He tells Peter that if Peter is willing to give up on the country Peter ought to take some time and really get to know America so that he knows what he is leaving.

Peter thinks it over and decides that he will begin a walk across America to fully learn what the country is all about, stopping to work as he needs money. Peter and his dog Cooper begin to walk and get in shape so that they are ready for the long walk. Peter says good-bye to his family and takes a camera from National Geographic before leaving Washington DC heading to the Gulf of Mexico.

Once on the road Peter begins to meet people that show their kindness and give him a glimpse of what Americans are really like. There is an old man named Homer Davenport that lived on a mountain. While Homer was protective of his home and way of life he eventually offers Peter to come and live with him. Peter will continue on his journey although this is the first hint of what Peter will find.

Peter eventually makes his way to a town where he will live for some time with a family of black people named Oliver. Peter works in a sawmill while living with the family. Although Peter is no relation to the family they will willingly take up arms in order to keep Peter and his dog Cooper safe. The people he meets continually move Peter.

Further on the journey Peter looses his companion Cooper when a truck runs him over. Peter will be forced to lean more on people and his faith is continually rewarded. Peter will meet governor Wallace, be taken in as family by many people he has never before met, live on in a commune, accept Jesus, and will even meet a woman whom he will marry.

More summaries and resources for teaching or studying A Walk Across America.

A Walk Across America from BookRags. (c)2022 BookRags, Inc. All rights reserved.