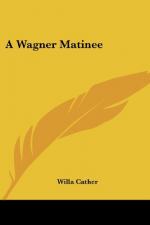 Willa Cather
This Study Guide consists of approximately 22 pages of chapter summaries, quotes, character analysis, themes, and more - everything you need to sharpen your knowledge of A Wagner Matinee.

This detailed literature summary also contains Quotes and a Free Quiz on A Wagner Matinee by Willa Cather.

The following version of this story was used to create this study guide: Cather, Willa. “A Wagner Matinee.” Early Novels and Stories. New York: Literary Classics of the United States, Inc. Pages 102–110.

The story opens around the year 1900. Clark, a man living in Boston, receives a letter from his uncle, Howard Carpenter, who lives in Nebraska. The letter states that Georgiana—Howard’s husband and Clark’s aunt—will be arriving in Boston to receive a bequest left to her in the will of a deceased relative. Clark recalls growing up in Nebraska and performing arduous farm work. Clark spent much of his free time studying subjects like literature, Latin, and ancient mythology. Georgiana had taught him to play the organ she had in the parlor of her home. Georgiana soon arrives in Boston, and Clark greets her at the coach station.

Clark recalls the major events of Georgiana’s life. She was born and raised in Boston, and she was a teacher at Boston Conservatory. While on a trip in Vermont, she met Howard Carpenter, a 21-year-old boy from a rural town. Howard and Georgiana fell in love, eloped, and moved to a homestead in a relatively unsettled part of Nebraska. Life was difficult there, especially towards the beginning. Georgiana has lived in Nebraska for 30 years, and her body is quite worn down from the physical difficulties of farm life. However, her greatest sadness appears to be the severe scarcity of music in her life, apart from the organ in her home. Clark decides to bring Georgiana to a matinee orchestral performance of pieces by composer Richard Wagner.

Georgiana’s demeanor is generally stoic and tired, but she seems to become more alert when they arrive at the concert hall. As the concert begins, Georgiana becomes even more alert, and Clark realizes that this is the first time she has heard orchestral music in 30 years. Georgiana is focused by impassive. However, by intermission, she is so moved by the music that she has begun to cry. Georgiana cries softly but continuously through most of the second half of the concert. After the concert ends, Georgiana cries out that she does not want to leave the concert hall. Clark realizes that Georgiana is dreading her inevitable return to her hard and desolate life in Nebraska.

More summaries and resources for teaching or studying A Wagner Matinee.