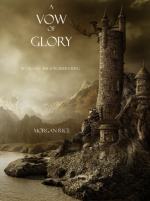 A Vow of Glory Summary & Study Guide includes comprehensive information and analysis to help you understand the book. This study guide contains the following sections:

This detailed literature summary also contains Quotes and a Free Quiz on A Vow of Glory by Morgan Rice.

A Vow of Glory by Morgan Rice is the fifth book in The Sorcerer’s Ring series. It covers events between the fall of the McCloud side of the Ring and Gwendolyn’s surrender to Andronicus. Themes in the novel include the characteristics of a good leader and allegiance to one’s vows. It is a classic story of good versus evil, set in the time when valiant knights still went on quests of bravery and loyalty was an admirable trait.

Gareth has arranged for the Destiny Sword to be stolen and taken out of the Ring. Without this Sword, the Shield that protects the Ring is down, leaving both the McCloud and MacGil territories open to attack. As the novel opens, Andronicus and his million man army has already attacked McCloud’s kingdom. Andronicus has taken McCloud prisoner, killed his people and burnt his town. Now he is moving toward MacGil territory. Thor and a group of friends have set out on a quest to retrieve the Destiny Sword and return it to its proper home.

In an effort to escape her brother Gareth and to get refuge from Andronicus, Gwendolyn has taken many of the people from her village to Silesia. Gweyn, whose father has deemed her the next MacGill ruler, is accepted as the new queen of Silesia. She works with advisors and other military men to fortify the city as best they can before Andronicus’ men arrive. Though they hold out as long as they can, the people of Silesia are forced to take refuge in the lower parts of their city.

Realizing that he has the advantage, Andronicus offers to let the people of Silesia go free if Gwen will surrender to him. Even though her people advise her not to do so, Gwen surrenders to Andronicus. He goes back on his word, saying that he will kill all of the people anyway despite his promise. At the conclusion of the novel, Andronicus is punishing Gwen by allowing McCloud to rape her in front of all of his people. Meanwhile, Thor and his group have been tricked by three men whom Thor had once thought were his brothers. These men lead Thor and his men into an ambush where they can be arrested by Empire forces.