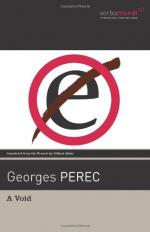 Get A Void from Amazon.com
View the Study Pack
Study Guide
Order our A Void Study Guide

Plot Summary
+Chapters Summary and Analysis
Introduction and Part I, Chapters 1 and 2
Style
Order our A Void Study Guide

Georges Perec
This Study Guide consists of approximately 4 pages of chapter summaries, quotes, character analysis, themes, and more - everything you need to sharpen your knowledge of A Void.

A Void Summary & Study Guide includes comprehensive information and analysis to help you understand the book. This study guide contains the following sections:

This detailed literature summary also contains Style on A Void by Georges Perec.

Georges Perec's novel, A Void, was first published in French in 1969, under the title La Disparition, which could be literally translated as "the disappearance." An Introduction warns that starvation haunts France, people are rioting in the streets, and the political leadership has been eliminated, but once the story proper begins, no such problems are again mentioned. Instead, the mental troubles of a man named Anton Vowl are explored. He sees mysterious patterns in objects, which he thinks hold clues to something vital that is missing from everyday life. His inability to identify this missing element is driving him to distraction. Eventually, Anton Vowl himself vanishes. Shortly before his disappearance, several of his friends received a postcard that mentioned a zoo in Paris, where three of these friends now go independently and encounter one another. They resolve to join forces in a search for Vowl. They also enlist the aid of a policeman named Ottaviani, who learns from his boss, Swan, that the police suspect Vowl was kidnapped. Not long after this, two of Vowl's friends, Conson and Olga, go to the home of the third person, Abbou, but shortly after their arrival, they hear a scuffle and find Abbou dead from a stabbing. At Abbou's funeral, Conson and Olga encounter a man named Savorgnan who also knew Vowl and received a postcard from him. Savorgnan and Conson go to a mansion in Azincourt, where they meet Olga and the mansion's owner, Clifford. These people exchange information about Vowl and voluminous materials written by him, in an attempt to unravel the mystery of his disappearance. Also at the mansion is Clifford's maid, Squaw, who has witnessed and shares many details that are useful to the investigators.

At the mansion, the group becomes convinced that clues to the mystery are contained in Vowl's various writings, but nobody can decipher the clues. Something vital is missing, but no one can identify it. When Clifford reads a particular poem, he suddenly drops dead. Conson calls the policeman, Ottaviani, who agrees to rush to the scene. While they await Ottaviani's arrival, Squaw tells the story behind the last word Clifford uttered before dying, which was "Zahir." It refers to the symbol of a family curse. Eventually, through sharing information based on investigations and travels by people in the group, it becomes clear that an old curse from a Turkish family steeped in black magic was transferred to Savorgnan's family. What's more, Savorgnan's family has a long tradition of killing all but the first-born sons of each father in order to avoid depleting the family fortune by dividing it among multiple inheritors. Astonishingly, it turns out that each member of the group, including Vowl, is related, although none of them was aware of it initially. Each member is subject to the family curse. As the mystery unravels, each of them dies.

Even the policeman, Ottaviani, who arrives with his boss, Swan, turns out to be a family member. Finally, only Swan, Ottaviani, Squaw, and Savorgnan remain alive at the mansion. Swan makes Ottaviani read a manuscript, which causes Ottaviani to drop dead. It becomes clear that the curse can be activated through reading manuscripts that are devoid of the letter "e," which is the missing element that nobody could identify. It also is now evident that Swann has been the agent of the murders, working for members of the accursed family. Swan then kills Savorgnan, gives a soliloquy and the novel ends.

More summaries and resources for teaching or studying A Void.

A Void from BookRags. (c)2022 BookRags, Inc. All rights reserved.