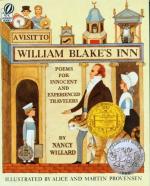 Nancy Willard
This Study Guide consists of approximately 50 pages of chapter summaries, quotes, character analysis, themes, and more - everything you need to sharpen your knowledge of A Visit to William Blake's Inn.

Commire, Anne, ed. Something About the Author. Vol. 37. Detroit: Gale, 1985. Contains an illustrated entry on Willard, drawing chiefly upon her own comments on her life and craft.

Includes a brief review of the critical reception given Willard's works.

Contains commentary from a variety of critics, including excerpts from Hilda Gregory's 1976 Prairie Schooner article on Willard.

More summaries and resources for teaching or studying A Visit to William Blake's Inn.