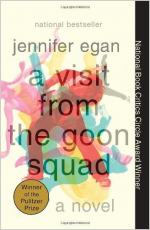 A Visit from the Goon Squad Setting & Symbolism

Sow's Ear Records is the record label founded by Bennie Salazar. Bennie made a name for himself after he promoted The Conduits, with its skinny guitarist named Bosco. Bennie went on to create careers for many until the music he was producing became little more than noise with mass appeal. Sow's Ear is also the record label that ends up firing him many years later after he attempts to serve the board of directors plates of cow pies.

Sow's Ear Records is located in a green glass building on the corner of Park Avenue and Fifty-second Street. Scotty describes Bennie's office as an opulent place. Scotty immediately becomes enamored of the luxury of the office and tells himself that he wants to give up his apartment and move into Bennie's waiting room.

He says, "Bennie's office was awesome, and I don't mean that in the...

A Visit from the Goon Squad from BookRags. (c)2022 BookRags, Inc. All rights reserved.