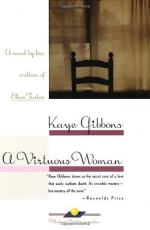 This detailed literature summary also contains Related Titles and a Free Quiz on A Virtuous Woman by Kaye Gibbons.

A Virtuous Woman is the second novel from award-winning author Kaye Gibbons. Ruby Stokes is a woman who was raised in the safety of a loving family, who learns that the world has a dark side when she impetuously marries the first man to ask. Ruby is dragged onto the migrant workers circuit, forced to work manual labor by her lazy, abusive husband. When her husband dies unexpectedly, Ruby is faced with the choice of going home in shame or marrying a local man who has taken an interest in her. Ruby chooses marriage, settling into a good life with a man who is deeply devoted to her. A Virtuous Woman is a novel of second chances and love, a novel that will touch the heart of even the most cynical reader.

Blinking Jack Stokes has just finished the last of the food his wife stocked up in the freezer in preparation for her death. Ruby has been dead four months, and Jack still cannot get used to being alone. Ruby knew he would not fair well alone, despite the fact that he was a bachelor for a long time before he married her. Ruby was right. Jack eats nothing but cereal now that the freezer is empty, has not washed dishes in weeks and spends a great deal of his time remembering the past.

Ruby was raised by a loving family on a farm in the southern part of the state. Ruby never had to do anything for herself because her family or the housekeeper was always there to do what needed doing. Ruby was so insulated within her family she did not know that darkness existed in people. One summer, Ruby's father hires a group of migrant workers to help out on the farm. Ruby falls in love with one of the young workers and agrees to marry him when he promises her the world. Ruby believes everything this man tells her, unable to believe anyone could lie to her. However, Ruby soon learns the truth about this dark, abusive man.

Ruby's new husband drags her onto the migrant workers circuit, forcing her to work because he is too lazy to show up on time. Ruby works hard while her husband drinks, gambles and seduces other women. The migrant workers settle in the northern part of the state, and Ruby is employed by a farmer's wife as a maid. Ruby works hard trying to prepare the house for a wedding. During this time, Ruby meets Jack Stokes, a local tenant farmer who is also working at the main house in preparation for the wedding.

The same day Ruby meets Jack, she learns that her husband has been in a fight and hospitalized for his injuries. Ruby learns this less than a day after she walked in on her husband with another woman. Ruby is angry and has bought a gun with the idea that she might wound her husband in order to scare him into treating her better. Due to this anger, Ruby refuses to go to the hospital to visit her husband. Later that night, Jack comes to her cabin and informs her that her husband has died of his wounds.

Ruby has a choice to stay or to go home in shame. Ruby cannot make herself face her parents, so she stays. Ruby and Jack become friends. Less than five months later, Jack and Ruby marry. Despite the short courtship and differences in their ages, Jack and Ruby have a good marriage. The only dark spot in their lives is their inability to have children. Due to this, Jack and Ruby devote a great deal of their time sharing in the rearing of their best friend's daughter.

After twenty years of marriage, Ruby learns she has lung cancer. Ruby begins to prepare for her death, stocking up the freezer for Jack. However, this runs out quickly, and Jack finds himself desperate for the care of a woman. Jack hires a local woman to clean and cook for him, but the woman is lazy and does not do the work Jack expects. Jack fires this woman and comes to rely on his best friend's daughter to care for him. One night Jack believes that he can feel Ruby lying beside him in their bed. Jack washes the bed sheets the next day and dresses carefully for bed, hoping Ruby will return. However, when Ruby does not return, Jack falls into a deep depression. Jack's best friend relieves this depression by giving Jack the land his family has worked for several generations, something Jack has felt should have been his all along.