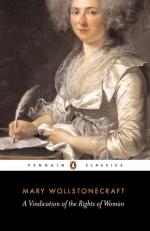 Introduction & Overview of A Vindication of the Rights of Woman

Mary Wollstonecraft
This Study Guide consists of approximately 31 pages of chapter summaries, quotes, character analysis, themes, and more - everything you need to sharpen your knowledge of A Vindication of the Rights of Woman.

A Vindication of the Rights of Woman Summary & Study Guide Description

A Vindication of the Rights of Woman Summary & Study Guide includes comprehensive information and analysis to help you understand the book. This study guide contains the following sections:

This detailed literature summary also contains Bibliography on A Vindication of the Rights of Woman by Mary Wollstonecraft.

A Vindication of the Rights of Woman (1792), by Mary Wollstonecraft, was published in London during the third year of the French Revolution and the fifth year of George Washington's presidency of the new United States of America. Responding to other writers who praised or attacked these antimonarchical uprisings, the tone of the book is by turn confrontational, instructive, harshly critical, sarcastically funny, idealistic, and visionary. Rooting her argument that women deserve an education equal to men's on the human duty to use God's gift of reason, Wollstonecraft set traditional gender roles on their ear. Though she states that she loves man as her "fellow," she is clear that "his scepter, real, or usurped, extends not to me, unless the reason of an individual demands my homage; and even then the submission is to reason, and not to man."

Long cited as the fundamental text of Western feminism, the book continues to contribute to modern social thought in many ways. Wollstonecraft repeatedly makes the connection between slaves and Western womeneven those in the middle class. She delves into the psychology of the materially dependent to examine why women generally play along with the prejudices held against them. She links race-based chattel slavery to gendered bondage, exposing how "masters" of women benefit from creating a subhuman female to fulfill their designs. Referring to gendered oppression as slavery, she brings the nebulous "woman question" into the spotlight of civil and human rights and lifts to public awareness the relationship between public political systems (the divine right of kings) and private personal systems (the divine right of husbands).

Wollstonecraft sought to improve philosopher Jean-Jacques Rousseau's (1712–1788) educational philosophy (the goal of education is to learn how to live) by leaps and bounds. Insisting that females had been created not merely to complement males, but with duties to carry out in public and spiritual realms, she urges that children of both sexes be taught to "begin to think." Rather than viewing knowledge as something to acquire and own, she suggests a process fueled by life experiences, which would allow thinkers to reason though events and ideally arrive at the practice of moral virtue. This is a process of lifelong learning. She applied her own method throughout her life, hence her philosophy (consisting of seven published volumes) kept changing. For example, in 1792, A Vindication of the Rights of Woman emphasized the view that human sexuality that was meant to be short-lived and supplanted by other duties. But after her love affair with Gilbert Imlay, her own work challenged this naive opinion, pondering the relationship of society to female desire. This method of applying reason and book-learning to life experience, and shining the lamp of the latter on the former, is known today as feminist pedagogy.

A Vindication of the Rights of Woman touches on many other strands in the mesh of social injustice. Readers will notice the repetition of certain topics and key words. These point to the history behind Wollstonecraft's concerns and highlight concerns of the day. Some of these concepts include "tyrant," "mob," "despotism," "liberty," "natural" (versus "artful"), "moral," "virtue," "vice," "revolution," and "reason." The source of these words can be traced to the Western philosophical movement known as the Enlightenment, and to uprisings that were overthrowing old forms of government based on monarchies. Her structure is also designed to appeal to her contemporaries. Wollstonecraft's writing is elliptical: rather than attack certain issues head-on, she returns to them over and over again, establishing their importance by examining them from many different angles. This method was intended to better appeal to the day's literate British audience, which she said suffered from a "fear of innovation." Therefore A Vindication of the Rights of Woman is written with a layered effect, mimicking the way prejudices affect layer after layer of human experience.

Far from offering dead debates, A Vindication of the Rights of Woman continues to address today's concerns. For instance, Wollstonecraft argues that neither the soul nor the mind has a sex. At the same time, she acknowledges that men are, in general, physically stronger, while women are naturally inclined to please and relate. Some bio-determinists direct their research to debating and supporting the same gender claims. In "The New Science of Sex" (2003), Iain Murray, for example, cites Andrew Sullivan's research claiming that because of high rates of testosterone, men think more, "especially about concrete problems in the immediate present," and they are more "frustrated" when action is thwarted. Murray also notes that some bio-determinists believe humans may be similar to mice when it comes to "a gene that determines 'good' motherhood." Murray also cites Cambridge University psychologist Simon Baron-Cohen, whose research indicates that men are "much more likely" to have a systematizing-type brain, while women exhibit a brain type known as empathizing. Two hundred years after her death, many issues that Wollstonecraft raised in her essay have shifted shape, but are still just as pressing and relevant.

More summaries and resources for teaching or studying A Vindication of the Rights of Woman.

A Vindication of the Rights of Woman from BookRags. (c)2022 BookRags, Inc. All rights reserved.