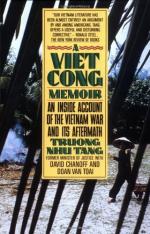 A Vietcong Memoir: An Inside Account of the Vietnam War and Its Aftermath Summary & Study Guide

A Vietcong Memoir: An Inside Account of the Vietnam War and Its Aftermath Summary & Study Guide Description

A Vietcong Memoir: An Inside Account of the Vietnam War and Its Aftermath Summary & Study Guide includes comprehensive information and analysis to help you understand the book. This study guide contains the following sections:

This detailed literature summary also contains Topics for Discussion and a Free Quiz on A Vietcong Memoir: An Inside Account of the Vietnam War and Its Aftermath by Truong Nhu Tang.

The story begins with Truong Nhu Tang's description of his childhood, a situation he calls the "family cocoon." In this protective life, it is decided by Tang's father that Tang is to become a pharmacist. His older brother was told by their father to become a doctor, and the plan is for the two brothers to go into practice together, a practice that will be exemplary and profitable for both. Of Tang's younger four brothers, one is to be a banker, who will finance the engineering endeavors of the remaining three, all destined by their father to become engineers.

Tang describes his childhood as a "cocoon," and though he has little interest in pharmacy, he doesn't refuse his father. When Tang reaches Paris, he meets Ho Chi Minh. Tang is extremely impressed with the leader's methods of instilling loyalty and finds himself quickly caught up in the political climate of the day. Tang begins by spending all the time he has free studying politics, then drops out of pharmacy school to continue this course of study. As the military of the opposing forces clash, Tang is kept in the country near Saigon until his father feels it is safe for him to return to Paris. During that time, he meets and falls in love with a girl. His father, believing the young woman can bring Tang out of his misplaced interest in politics, encourages the liaison and the two are soon married, though Tang continues his support of the political endeavors of the National Liberation Front. His natural intelligence combined with his degree makes him a prime candidate for positions within the new government, and he serves in several.

Over time, Tang continues his work with the NLF though he is arrested and tortured on one occasion. His parents have forced him to give up his wife, but when his father contacts Tang with news that the family businesses are floundering, Tang immediately comes home to help support his five brothers who are all still in school. Tang is almost immediately drafted and volunteers for a teaching position at a remote area to keep from having to serve in a combat capacity. Tang continues to send money home. When the NLF is at its height, Tang and others are forced into hiding. Tang endures the hardships of the jungle for years, returning as Saigon falls following the United States' decision to pull out military backup.

Tang soon becomes disillusioned with the government and likens the harsh practices to those exercised by the communist party. When he sees no other way, he and his wife escape by boat, landing on an Indonesian oil drilling tanker.

A Vietcong Memoir: An Inside Account of the Vietnam War and Its Aftermath from BookRags. (c)2022 BookRags, Inc. All rights reserved.