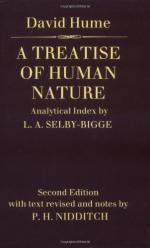 David Hume
This Study Guide consists of approximately 30 pages of chapter summaries, quotes, character analysis, themes, and more - everything you need to sharpen your knowledge of A Treatise of Human Nature.

A Treatise of Human Nature Summary & Study Guide includes comprehensive information and analysis to help you understand the book. This study guide contains the following sections:

This detailed literature summary also contains Topics for Discussion and a Free Quiz on A Treatise of Human Nature by David Hume.

The Treatise of Human Nature ranks among the great works of philosophy in all of history. David Hume (1711 - 1776) wrote the Treatise in 1738 and published it in 1739 and 1740. Its originality alone would have given Hume a place in history but the maturity of the book, though written by Hume at such an early age, establishes him as one of history's great geniuses.

The Treatise is an exercise in epistemology, moral psychology and cognitive science. Hume is out to give an account of human nature. Hume gives accounts of how humans come to know things, how they think about things, what emotions are, what perception is, whether there is free will, the relationship between will, reason and passion, the basis of morality and virtue, the nature of moral judgment, and the origins of society and social morality. He answers these questions in three books; Book I concerns the understanding, Book II, the passions, and Book III, morality.

In Book I, 'Of the Understanding,' Hume begins by making a series of crucial distinctions that lie at the foundations of his system. Hume is a radical empiricist. He believes that all the substantive, non-trivial knowledge that we possess derives from the senses. Further, he thinks our mind trades exclusively in perceptions - it does not know reality directly. Skepticism of a radical sort is always a possibility when one does philosophy. Hume divides perception into impressions, ideas and relations between them. Hume uses this taxonomy of mental entities to reach several important conclusions. First, universals are mere mental entities. Second, there are no truths of reason except stipulated definitions. Third, causation is not real, it is only a relation we impose on the world.

In Book II, 'Of the Passions,' Hume uses the ideas of Book I to generate an account of human psychology, emotions and judgments. Hume begins by rooting all emotions in the idea of judgments of approbation and disapprobation which he ties to the sensations of pleasure and pain. He roots pride and humility in these ideas and then roots what he calls 'indirect passions' such as love and hatred. He explains emotions in terms of relations of sensations and judgments to the self or to others and connects emotions derived from others in sympathy. Finally, Hume addresses direct passions and famously argues that there is no free will, for a volition is merely an internal impression.

In Book III, 'Of Morals,' Hume gives an explanation of morality. Hume first argues against moral rationalists who hold that moral truths are truths of reason. Hume thinks that reason only moves the mind from extant desires to conclusions, giving his famous instrumentalist account of reason. From this Hume famously argues that reason is merely the slave of the passions. Sentiment and emotion grounds morality - all moral judgments are judgments of relations between perceptions in the world or of the self in relation to a sensation of pleasure or pain. Hume then ties the idea of virtue and vice to what brings pleasure or pain to the mind. Hume goes on to distinguish between natural and artificial virtues. He gives a famous spontaneous order theory of the evolution of norms of justice, which he believes to be an artificial, culturally constructed set of ideas. He ends with his account of natural virtues and how they come to be understood through their connections to pleasures and pains.

More summaries and resources for teaching or studying A Treatise of Human Nature.

A Treatise of Human Nature from BookRags. (c)2022 BookRags, Inc. All rights reserved.