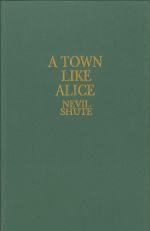 Nevil Shute
This Study Guide consists of approximately 63 pages of chapter summaries, quotes, character analysis, themes, and more - everything you need to sharpen your knowledge of A Town Like Alice.

A Town Like Alice Summary & Study Guide includes comprehensive information and analysis to help you understand the book. This study guide contains the following sections:

This detailed literature summary also contains Topics for Discussion and a Free Quiz on A Town Like Alice by Nevil Shute.

A Town Like Alice tells the story of a plucky young Englishwoman who becomes a legend in Malaya during World War II, inherits a fortune, marries her true love, and wisely uses her money to transform an Australian ghost town into a thriving community.

When Douglas Macfadden dies in Scotland, his lawyer, Noel Strachan, finds his sole-surviving heir, 27-year-old great-niece Jean Paget. She and her brother Donald work in Malaya before the war. She alone returns to England, where she lives the boring life of a secretary in a small leather factory. An uncle's inheritance saves her from this. It is held in trust until she is 35, but the elderly, widowed trustee can raise capital in an emergency. He quickly falls in love with her. After declaring her intention to return to Malaya and build a well for natives who kept her and fellow prisoners alive in the war, Paget details three years of forced marching around the peninsula. Only 15 of the 32 women and children with whom Paget starts out survive.

During the march, they meet two Australian POWs impressed to drive trucks for the Japanese. One of them, Joe Harman, barters stolen gasoline to obtain the drugs and soap the pitiful women need, and then steals some prized chickens belonging to the sadistic Japanese commander. In retribution, Harman is crucified, flogged, and left for dead. Paget and her companions, who are forced to watch, trudge on in horror and shock. Staid Strachan is shocked and inspired by the story but has qualms. Nevertheless, Paget sails to Malaya and builds not just a well but also a primitive community center as a thanks offering to the women. This brings Paget needed closure. Learning from the well diggers that Harman amazingly survives, Paget goes to Australia to find him. At the same time, however, Harman is in England, looking for Paget, whom he has just learned is not married, as he had feared. Harman locates Strachan, who is emotionally torn, and sends him back to Australia by steamship, without telling him Paget's whereabouts.

Conscience forces Strachan to inform Paget of the situation by airmail, and she remains in Australia, waiting. After visiting his hometown, Alice Springs, whose lifestyle she learns to admire, Paget goes outback to Willstown, a miserable little place in Queensland near Midhurst, the cattle station where Harman works. Familiar with fancy leather goods from her postwar job in London, Paget passes the time by making a pair of alligator shoes, which the local residents feel could make a viable local industry. She writes Strachan a long proposal and asks he release £5,000 pounds of her inheritance to finance it. Pack, the head of the leather goods company for which she had worked, vouches for the idea and volunteers to distribute Paget's shoes in Britain. He also dispatches an experienced supervisor to help with set-up and training, and Strachan releases the funds. She flies to Brisbane and checks into the Strand Hotel, where he always stays.

Their first meeting at the airport, drive to the hotel, and evening together are awkward, until she changes into the worn Malay sarong he knows her in, and something clicks. They vacation on a coral island and decide to marry, but Paget wants a year to adapt to life in Willstown and get her businesses off the ground. Along with the shoe factory, intended to keep marriageable girls in town, she opens an ice cream parlor, where they can spend their wages. This is followed by other enterprises aimed at improving the quality of life in town. Paget makes a good start in transforming Willstown into "A Town Like Alice," and fits in even better after playing a key role in the life-or-death rescue of a neighbor. After Paget and Harman marry and begin their family, Strachan visits, sees all she has accomplished, and returns home to write the story of a woman who has made a difference, but whom he has met 40 years too late.

More summaries and resources for teaching or studying A Town Like Alice.

A Town Like Alice from BookRags. (c)2021 BookRags, Inc. All rights reserved.