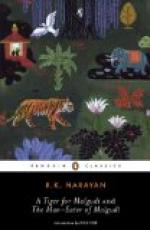 This Study Guide consists of approximately 40 pages of chapter summaries, quotes, character analysis, themes, and more - everything you need to sharpen your knowledge of A Tiger for Malgudi.

A Tiger for Malgudi Summary & Study Guide includes comprehensive information and analysis to help you understand the book. This study guide contains the following sections:

This detailed literature summary also contains Quotes and a Free Quiz on A Tiger for Malgudi by .

The following version of this book was used to create the guide: Narayan, R.K. A Tiger for Malgudi. Penguin, 1984.

A Tiger for Malgudi begins with a tiger, later to be named Raja, recounting the events in his life that led up to his peaceful elderly days in the Malgudi zoo. He is content enough in the zoo, but occasionally misses the freedom of the wild, and he impatiently paces his cage.

Raja's memories take him to his early days in the jungles of India, when he was a fierce predator and all other animals feared him. Living amongst the wildernesses of the Mempi Range, Raja asserts his dominance over other animals by punishing them if they fail to show respect to him, and hunting and eating as he pleases. He is concerned about some creatures, including the leopards, but his first real test of strength comes when he meets a powerful female tiger who disobeys his command for her to step out of his way (17). Attempting to show his strength, he attacks her, but she fights back strongly and they almost kill one another; both bloodied and wearied, they are brought together by the words of a passing jackal, and become friends. Time passes, and the two start a family together.

Raja then recounts that one day, when his mate was out hunting, his three cubs went to look for their mother, but failed to return home. Looking for his family, Raja finds that they have been killed by hunters. Enraged, he follows the hunters to their village, where he attacks and kills a sheep. Satisfied by this "easy" method of hunting, Raja begins a period of stalking rural villages, killing the livestock of the villagers for sport. As Raja's attacks became more daring, and as the villagers became more concerned for their animals, he attracts the attention of the leader of a travelling circus, "Captain." Not long after, Captain baits Raja, and catches him in a steel cage (38).

Captain takes Raja to the circus, where he and his wife, Rita, have been busily preparing for a "jubilee" show. This begins a long period of Raja's life when he was a prisoner to Captain, and became subservient to him due to the constant threat of violence. Raja is trained to perform various tricks, from running around the circus arena, to jumping flaming obstacles. As a final trick, Captain forces Raja to share a dish of milk with a goat, against Raja's nature as a predator. All goes well, until one particular jubilee performance. After a distraction takes place in the audience, Raja attacks the goat and kills it in front of the crowd, which earns him a harsh punishment from Captain and his removal from the show.

Soon after this event, Madan, a film director, approaches Captain to discuss using Raja in a film. Captain agrees, but repeatedly delays filming, much to Madan's annoyance. They eventually begin production, and go about filming a strong-man named Jaggu, making it appear as though Jaggu and Raja are fighting. Jaggu, though, is terrified by the tiger, and filming is regularly disrupted. During one particularly disruptive day, Captain uses a cattle prod on Raja, electrocuting him. Rather than controlling the tiger, it angers him to such an extent that he kills Captain, after trying to swipe the prod from his hand. With the film set thrown into chaos, and with Captain dead, Raja runs away.

Raja arrives at the nearest city, Malgudi, and he throws people into fits of terror wherever he goes. However, by now Raja has no interest in violence, and just wants to enjoy his freedom. He bounds around the streets, looking in at restaurants and cafés, and eventually follows a class of school children into their school. Entering the headmaster's office, he curls up on the floor and sleeps; the headmaster jumps on his desk in terror and climbs into an attic. The citizens call for help.

A hunter named Alphonse shows up at the school with a gun, but considers it too great a risk to enter the office through the door. Meanwhile, a spiritual man whom Raja names "the Master" also turns up, and tries to encourage the assembled crowd to calm down. Alphonse forms an elaborate plan to climb a ladder outside the school and to free the headmaster through the roof of the building, but becomes drunk when he repeatedly sips on rum for courage, and falls asleep. Seizing his moment, the Master enters the office and calmly speaks to the tiger, who finds that he can, somehow, understand the Master's words. Telling him he has no use now for violence or aggression, he commands the tiger to sit still while the headmaster leaves, and then the Master and Raja calmly exit the building together, much to the surprise of the citizens.

The Master and Raja travel widely, startling people wherever they go, but also inspiring people to choose non-violent paths. Arriving at a mountain range, they make their new home in a cave under a rocky outcrop, where they begin to receive visitors who wish to see the man who has befriended a tiger. One day, a woman visits the Master, and she reveals she is the wife who he left behind, and mother of his children. The Master tells her he was her husband once, but is no longer the same person, just as Raja is no longer the same tiger he once was. She leaves them, returning to the city alone.

As Raja grows older, he is less and less able to hunt or fend for himself. The Master sees this, and arranges for a zoo keeper from the Malgudi zoo to visit them. The keeper agrees to take good care of Raja, and strokes him as a sign of friendship. The Master tells Raja he is to retire to the zoo, where he will be loved and will bring happiness to children, and where he will no longer need to hunt or commit violent acts. He says goodbye to his friend, but tells him he believes he will meet him again, when they have both left their bodies and become their true selves.

More summaries and resources for teaching or studying A Tiger for Malgudi.

A Tiger for Malgudi from BookRags. (c)2022 BookRags, Inc. All rights reserved.