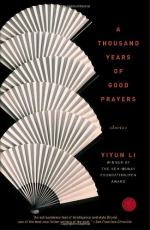 This Study Guide consists of approximately 75 pages of chapter summaries, quotes, character analysis, themes, and more - everything you need to sharpen your knowledge of A Thousand Years of Good Prayers.

This detailed literature summary also contains Quotes and a Free Quiz on A Thousand Years of Good Prayers by .

A Thousand Years of Good Prayers begins with “Extra,” a story that follows Granny Lin in Beijing as she struggles after the factory where she works goes bankrupt. She marries an older man and becomes his caretaker, but he soon dies and the family blames Granny Lin’s negligence for his death. Granny Lin then becomes a maid in a boarding school, where she befriends a young boy named Kang. Granny Lin notices that Kang steals girls’ socks and keeps them in his bed, but chooses to allow Kang this idiosyncrasy. When this habit is revealed to the school supervisors, Granny Lin is dismissed from her job; she leaves the school with her belongings, which are quickly stolen from her, leaving her with a lunch pail containing her compensation and a few packages of socks.

The story “After a Life” describes the lives of Mr. and Mrs. Su, the retired parents of Jian, a college-aged son, and Beibei, Jian’s elder sister who was born with “severe mental retardation” (23). The Sus meticulously hide Beibei’s existence, which isolates Mrs. Su, who stays at home with Beibei, with the frequent phone calls from Mrs. Fong, the wife of Mr. Su’s best friend, who suspects her husband of using Mr. Su to hide an affair. Mr. Su and Mr. Fong spend their days at the stock brokerage, discussing China’s movement towards a capitalist economy and the difficulties of love: Mr. Fong fell in love with another woman when Mrs. Fong was in jail for embezzlement, and Mr. Su admits that he and his wife are first cousins. Mrs. Su feeds Beibei extra sleeping pills before Mr. Su arrives home with Mr. Fong, who has just suggested to his wife that his mistress move in with them. The story ends with Beibei’s death.

“Immortality” describes the inhabitants of a rural village, which historically provided eunuchs as servants to the emperors, as they shift their loyalties to Chairman Mao. An unnamed boy of a disgraced family in the village grows up with a face very similar to Mao’s, and leaves the village after Mao’s death to become Mao’s impersonator. The villagers take pride that one of their own has such an important role to play, despite having refused him their daughters as wives in his youth. Once the boy is a middle-aged man, he becomes concerned that no woman or potential child would live up to his greatness, and so never marries; this leads to his being caught with a prostitute, which causes his dismissal from his role as Mao’s impersonator. Upon returning to the village, the man castrates himself.

“The Princess of Nebraska” follows Sasha and Boshen as they navigate Chicago to get Sasha to her appointment for an abortion. As Sasha and Boshen watch the Thanksgiving Day parade, several flashbacks occur, communicating that Sasha is pregnant by Yang, a young opera singer turned prostitute, who also happened to be Boshen’s lover in China. When Yang felt that Boshen was not keeping his promise to return Yang to the stage, Yang left Boshen for Sasha, just before Sasha left China for school in Nebraska and Boshen was exiled for writing about an AIDS epidemic. Boshen pressures Sasha to continue the pregnancy, hoping that a child will convince Yang to come to the United States; Sasha considers the benefits of a child being born in the US, but is ultimately overwhelmed by the sadness of her situation.

“Love in the Marketplace” describes Sansan’s regret that, as a college student ten years before, she had fallen in love with Tu but then convinced him to travel to the United States and marry Min, who was barred from many careers in China due to having taken part in the protests at Tiananmen Square. Sansan and Tu had agreed that once Min was safely situated, they would divorce and Tu would return to China to marry Sansan, but Tu and Min fall in love. Sansan visits her mother’s boiled egg stand at the train station, and learns that Tu and Min have divorced; Sansan’s mother encourages Sansan to marry Tu, but Sansan feels wronged by Tu’s broken promise. As the story concludes, opium is found in the snacks Sansan eats regularly and a beggar announces that he will allow any payer to cut his body with a knife; Sansan takes him up on this promise.

“Son” depicts Han’s return home to Beijing to visit his mother, whose naiveté both frustrates and worries Han; Han’s mother had been a blind follower of his father’s communism, and after his father’s death, she became a blind follower of Christianity. Han struggles to reconcile his annoyance with his mother’s blind faith with his desire to protect her, leading him to lash out when she tries to protect his soul by converting him. When Han’s mother goes to church, Han contemplates how his gayness means he will never be a husband or father, and thus will forever be bound by filial duty. When his mother returns from the service, Han admits his sexuality to her, and she accepts him with the promise that her god accepts him, as well.

“The Arrangement” follows Ruolan’s experience of her family’s convoluted relationships; her father travels most of the year to visit his long-time lover, while her mother emotionally abuses her at home. Through Uncle Bing, Ruolan learns that her father’s family forced the marriage to “cure him of his infatuation,” but also that her mother is a “stone woman” and cannot have penetrative sex (141). Ruolan sees that Uncle Bing is in love with her mother, and tries to dissuade him of his love by seducing him herself. When Uncle Bing rejects her advances, Ruolan decides to run away from her mother, Uncle Bing, and home.

“Death Is Not a Bad Joke If Told the Right Way” describes the life of a young girl who stays with the Pangs twice a year when she is allowed to leave the Institute where her family lives. Mr. Pang works without pay because his family used to own land; this shift into poverty negatively leads him to isolate himself. Mrs. Pang explains to the girl that dying early is better than suffering. The girl’s father helps Mr. Pang to find a temporary job, but Mr. Pang is soon killed for his pocket change. The girl imagines the Songs, the Pangs’ rowdy neighbors, laughing at Mr. Pang’s death.

“Persimmons” follows the conversation of several villagers in rural China during a drought. They discuss how Lao Da was executed after he murdered 17 politicians because they refused to take action against the rich men who killed his son. The villagers cannot decide if Lao Da’s actions were righteous or selfish, if the drought was a punishment for Lao Da’s actions or a result of Heaven’s anger at Lao Da’s execution, or if they are at all culpable for the situation. The story ends by informing the reader that the villagers had built a reservoir to help them during droughts, but that the reservoir became “an entertaining site” for wealthy people, and that one of these wealthy people had drowned Lao Da’s son (184).

“A Thousand Years of Good Prayers” concludes the collection, and describes the experiences of Mr. Shi as he visits the United States to visit his daughter, who recently got divorced. He befriends an elderly Iranian woman, despite their inability to communicate with each other. Mr. Shi is troubled by his daughter’s unwillingness to talk to him; the daughter explains that she is not able to communicate emotion in Chinese because he and her mother never spoke to one another. Mr. Shi then confesses to his friend that, decades before, he was demoted from being a rocket scientist in China because he, a married man, refused to acknowledge his emotional affair with a colleague; this situation was mandatorily kept confidential from the public, including his wife.

More summaries and resources for teaching or studying A Thousand Years of Good Prayers.