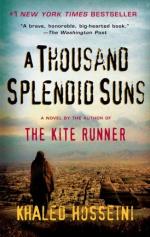 This detailed literature summary also contains Topics for Discussion and a Free Quiz on A Thousand Splendid Suns by Khaled Hosseini.

Miriam is a bastard daughter of a wealthy man, and she is given away in marriage to a much older shoemaker, Rasheed. She disappoints him by failing to produce a child, and their marriage is an unhappy one. Another child, Laila, is raised down the street from Miriam and Rasheed. Her best friend is a one-legged boy, Tariq, and as war and political instability settles on Kabul, they become lovers. They are separated when Tariq's family flees to Pakistan, and then Laila's parents are killed in a rocket attack. When Laila is taken in by Miriam and Rasheed, she is already pregnant with Tariq's child, but Rasheed marries her, and for nine months, treats her well, because he still hopes for a boy. When Laila gives birth to Aziza, a girl, he begins to treat her worse and worse, until finally Miriam intercedes in a fight, and kills him with a shovel. She is executed for the murder of her husband, but Tariq returns from Pakistan and takes Laila and his daughter and Laila's daughter by Rasheed back to Pakistan with him. When American forces move the Taliban out of Afghanistan, Laila and Tariq return to Afghanistan with their children, and Laila is pregnant with another child, whom she will name after Miriam.

Miriam is raised outside of Herat in a cabin. When she goes into town to see her father's house, her mother is driven to distraction, and kills herself. Miriam goes to stay with her father's family, but only for a couple of weeks, before she is married off to a shoemaker from Kabul, who does not treat her well. When she has several miscarriages, and cannot produce a child for him, their marriage becomes miserable, and he mistreats her.

On the night of the coup, when Afghanistan communists overthrow Daoud Khan's government, Fariba gives birth to Laila. Her husband, Hakim, is a scholar who teaches the girl poetry and history. This is encouraged by the new communist government, which allows women to study for professions. The reader meets Laila at age nine, when she is best friends with the carpenter's one-legged son Tariq.

As the political situation devolves in Afghanistan, Kabul is attacked by Mujahideeen, and Tariq's family makes plans to leave. Finally so does Laila's family, but as they are packing, a bomb hits their house, killing Laila's mother and father.

Laila is taken in by Rasheed, Miriam's husband, and nursed back to health. She is pregnant with Tariq's child, and agrees to marry Rasheed after Rasheed arranges for someone to tell her that Tariq was killed.

Laila enjoys Rasheed's favor for a time again when she gives birth to a son, Zalmai, but Rasheed eventually mistreats her, and she and Miriam try to run away. They are caught and sent back home, and Rasheed locks Laila in her room without food for two days.

After this, the drought comes to Kabul, and also the war. Laila is restricted, and conditions get bad enough that they give Aziza away to an orphanage because they cannot provide for her. Life becomes a difficult grind for her and Miriam, as Rasheed becomes more and more gruff and domineering, and political conditions worsen.

Things come to a head when Tariq shows up in Kabul, and Zalmai sees him waiting across the street for Laila. Miriam takes him upstairs while Laila and Tariq get to know each other again downstairs.

This visit from Tariq infuriates Rasheed, when Zalmai tells him, and he locks the child in his room, and begins to beat Laila. She tries to fight back, but soon he has her pinned by the throat. Miriam hits Rasheed once with a shovel, stunning him, then hits him again will all her force, killing him. Laila thinks they can escape together, but Miriam takes responsibility for her act, and turns herself in, to protect Laila and Aziza and Zalmai. At the trial, she tells the judge what happens, but the judge knows that the crime is not his to forgive—she must die and ask forgiveness herself from Allah.

After Miriam's death, Laila and Tariq take Aziza and Zalmai to Pakistan, where Tariq has been working. They make a new life there, and when the WTC attacks take place, and the U.S. declares war on Afghanistan, the Taliban is finally removed from power. Laila tells Tariq that she wants to go back there, because it will give Miriam's life meaning if they make contributions with theirs. They go to Herat first, where Laila gets a box that Jalil had given to Mullah Faizullah for Miriam. It has a letter of apology, and also money that would have been her inheritance. Laila and Tariq use this money to help an orphanage in Kabul, and they are pregnant with another baby. Aziza and Zalmai and Tariq consider boy names for the baby—Laila already knows what its name will be if it's a girl.