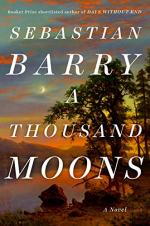 Sebastian Barry
This Study Guide consists of approximately 28 pages of chapter summaries, quotes, character analysis, themes, and more - everything you need to sharpen your knowledge of A Thousand Moons.

This detailed literature summary also contains Quotes and a Free Quiz on A Thousand Moons by Sebastian Barry.

The following version of this book was used to create the guide: Barry, Sebastian. A Thousand Moons. Viking, 2020.

The novel begins with Winona, a young Lakota girl living in Tennessee with an adopted family after her entire family was killed in the Civil War. Her town is very poor, but she has everything she needs with Thomas McNulty and John Cole. Winona is engaged to a boy from town, Jas Jonski. Winona is unsure whether she wants to get married, but she also worries that people in town object to their relationship because Jas is white.

Winona also lives with Rosalee Bouguereau, a Black woman who works on the farm. One day, Winona returns to the house bloody and bruised, and clearly sexually assaulted. Rosalee holds her and consoles her as a mother would. Winona's family is in an uproar and demands to know who attacked her although she refuses to divulge this information. Her guardians kidnap Jas Jonski and tie him up in their home in order to interrogate him. He refuses to say whether it was him who hurt Winona and she begs them to release him.

Tennyson, Rosalee's brother, is punished for imprisoning Jas because he is a former slave, so Winona sets out to find out who beat him. She must travel by night, so she borrows the family mule and cuts her hair short to disguise herself as a boy to protect herself. She borrows Tennyson's gun for her travels. Winona is shot while hiding in the woods. She realizes that another young Indian girl, Peg, is the one who shot her. Peg walks Winona back to camp and tries to help clean her bullet wound.

Winona hallucinates that she is seeing her mother as a result of the pain. She falls unconscious and wakes up in an unfamiliar room. When Jas walks in, Winona panics because she does not want to be forced to marry him. She also wakes up without Tennyson's gun which worries her greatly because it is his most important possession. Jas returns with a doctor who extricates the bullet from Winona's body and she falls back asleep after.

Winona returns back home and attempts to heal and get back to her normal life. She is still preoccupied with finding Tennyson's rifle. She again rides outside of town with her mule to look for the rifle, stumbling upon Peg again. Peg leads Winona into her town and helps her recover the rifle. Peg begs to go with Winona, so the two girls return to the farm together.

The sheriff tells Winona that Jas Jonski has been killed, and she is a prime suspect in the murder. Winona is arrested and forced to stand trial for the crime. She is found guilty and sentenced to death. Sheriff Parkman reveals to Winona that he knows she did not kill Jas, but he still wishes for her to be punished because Jas was his friend. Another man shoots the sheriff after hearing his admission, but not before the sheriff shoots Winona. Winona is wounded but eventually makes a full recovery back on the farm with her family.

More summaries and resources for teaching or studying A Thousand Moons.