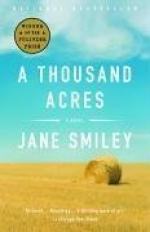 This detailed literature summary also contains Topics for Discussion on A Thousand Acres by Jane Smiley.

Written in 1991, A Thousand Acres is a Pulitzer Prize-winning novel by author Jane Smiley. A film adaptation was released in 1997 starring Michelle Pfeiffer and Jessica Lange. The story takes place in a small farming town in 1979 Iowa and centers around the Cook family. The aging father of three daughters decides to hand his farm over to their care. However, things go wrong quickly as the father comes to believe the eldest two daughters is swindling him out of his money and his life. The story focuses on the events spinning out of control and how the events affect the lives of the Cook family. The story is told from the point of view of the oldest daughter, Virginia “Ginny” Cook.

A Thousand Acres begins at a pig roasting party hosted by neighbor Harold Clark. One of his sons, Jess, has returned after dodging the draft for thirteen years. At the party, Harold begins bragging about a new tractor he bought. The bragging infuriates a slightly drunk Larry Cook. He brags he is going to give his one-thousand acre farm to his three daughters and let them run the family business. The younger daughter, Caroline, is upset by the transaction, so Larry cuts her out of the deal.

Over the course of the next few days, Larry grows extremely erratic; while he was always an angry man, his temper is even more difficult to maintain. He is more distant with his daughters and sons-in-law, and he questions their every choice regarding the farm. He buys expensive furniture and leaves it out in the rain. He also wrecks his pickup truck after being extremely inebriated. His oldest daughters, Ginny and Rose, decide they have to be firmer with their father. They believe he cannot keep acting in this way. Larry is furious with them, though. One night during a storm, he curses both of them and then wanders out into the storm alone.

The day after the storm, Rose and Ginny begin talking about their father. Rose is furious at his actions, and she reveals both she and Ginny had been assaulted and raped by their father when they were teenagers. Ginny promptly dismisses this by saying she does not remember her father raping her. But Rose nevertheless remains furious at her father. The family decides to meet at the Fourth of July dinner at the church to keep up appearances. The daughters are worried the town is beginning to gossip about their family problems.

At the dinner, Larry is aloof and chatting with the townspeople and telling them children will only put their parents in a nursing home. His behavior worries Ginny and Rose, but they decide to pretend like nothing is wrong. The family all sit together at the dinner table in the center of the room, and then Harold, the neighbor, stands up and starts cursing both Ginny and Rose. He says they are trying to trick their father out of his hard-earned land, and then he accuses Jess of trying to steal his own farm to start an organic food business.

Days later, the family lawyer approaches Ginny and informs her Larry, with the help of Caroline, is suing both her and Rose for the farm. Their lawyer tells them to make the farm a model of perfection so they cannot lose the farm due to “mismanagement or abuse,” which is the clauseunder which Larry is suing them. Because the farm was profiting and had paid its debt off two days early, Ginny and Rose win the suit. Because of the tension and disintegration of the entire family, Ginny leaves her husband and moves to Minnesota.

She learns months later her father had died a mere five days after the trial. Ginny had also signed over all her land to her husband and Rose. Almost a year later, she gets a call from Rose saying her cancer had returned, and she needed someone to take care of her two children. After Rose dies, Ginny and Caroline meet each other at their family homestead to divide the assets. They end up arguing, and Caroline storms out. Ginny decides to auction all the belongings her family left.