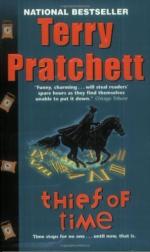 A Thief of Time: A Novel Summary & Study Guide

Tony Hillerman
This Study Guide consists of approximately 30 pages of chapter summaries, quotes, character analysis, themes, and more - everything you need to sharpen your knowledge of A Thief of Time.

A Thief of Time: A Novel Summary & Study Guide Description

A Thief of Time: A Novel Summary & Study Guide includes comprehensive information and analysis to help you understand the book. This study guide contains the following sections:

This detailed literature summary also contains Topics for Discussion and a Free Quiz on A Thief of Time: A Novel by Tony Hillerman.

A Thief of Time is a novel in the mystery genre set in the Four Corners region. What begins as a missing person case soon develops into a complex web of crimes involving larceny, grave robbing, and murder. Two main characters, both officers with the Navajo Tribal Police, work tirelessly to solve the case.

Joe Leaphorn is a middle aged Lieutenant with the tribal police. He has recently lost his wife and quite possibly his will to live. After his wife died, he submitted his letter of resignation and requested to be placed on leave. Once his leave expires, Leaphorn will be retired. During this time, a friend asks Leaphorn to accompany him on a trip to a Chaco Culture National Historical Park to take a report on a missing anthropologist. Despite his shock and depression over losing his wife, Leaphorn finds that his police instincts are returning and he is becoming interested in the case. Leaphorn decides that he will work on the case during his period of leave, and then he will retire after having solved one last case.

Jim Chee is a young officer with the tribal police. Chee hasn't been out of college long, and he is in some ways a younger version of Joe Leaphorn. Chee's personal life is less than satisfying because a woman he cared about has recently moved away. During a boring assignment where Chee was supposed to watch some tribal property, someone stole heavy earth moving equipment. Chee is then assigned to the task of catching the thieves. While searching for the thieves, Chee finds instead a murder scene with two bodies and the missing earth moving equipment. Within a couple of days it becomes clear that Chee's theft case and Leaphorn's missing person case may be connected. They agree to work together.

Throughout much of the book Leaphorn and Chee can be viewed as dual protagonists. Most often they work alone but share findings. A chapter covering Leaphorn's progress is usually followed by a chapter detailing Chee's discoveries. During the course of the mystery, the reader is introduced to many traditional Navajo beliefs, and most of the time these ideas are juxtaposed against the realities of the modern world. Joe Leaphorn is the older more experienced character who has rejected many of the traditional beliefs. Jim Chee, many years younger, is trying to find his way in modern society while still retaining some traditional Navajo ways.

Along the path to solving the mystery, Leaphorn and Chee met a wide variety of memorable characters, and many of them seem to be involved with either the missing person's case or the murders or both. The characters seem to come from all walks of life. Some are highly educated scientists studying the culture of the Anasazi. Some are shifty but likeable charlatans. And others are business and trades people, like lawyers, national park employees, art dealers and collectors, and mechanics.

As Leaphorn and Chee get closer to solving the mystery, another murder occurs. The clues from this murder seem to be connected to Leaphorn's and Chee's current cases, but at first the two officers cannot tell if this recent murder has clarified or complicated their task. As they near the solution it seems that the officers themselves might be in mortal danger.

More summaries and resources for teaching or studying A Thief of Time: A Novel.

A Thief of Time: A Novel from BookRags. (c)2022 BookRags, Inc. All rights reserved.