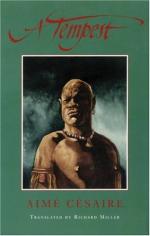 A Tempest: Based on Shakespeare's The Tempest, Adaptation for a Black Theatre Topics for Discussion

Compare and contrast Caliban and Ariel's responses to their servitude.

What is the moral of this play? Defend your position.

Why is Caliban so angry? Is his anger justified, and why?

Why is the ship of nobles shipwrecked near Caliban's island? What is the result of this shipwreck?

Compare and contrast Aime Cesaire's "A Tempest" with William Shakespeare's "The Tempest".

What role does race play in Cesaire's "A Tempest"?

Why does Eshu appear in "A Tempest"? What is his purpose?

Which character do you believe is the most justified in their actions? Defend your position.